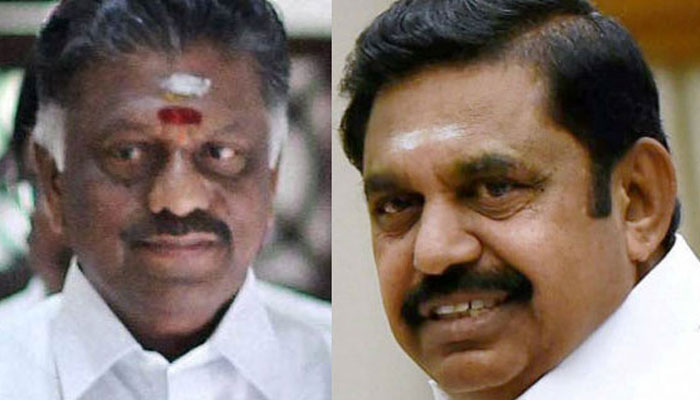 CHENNAI: The two rival factions of Tamil Nadu’s ruling party the AIADMK are expected to begin merger talks on Monday evening. They have not set a time or place, but on the table is an offer of resignation from the state’s Finance Minister D Jayakumar so that his portfolios can be given to the O Panneerselvam camp, a goodwill gesture from Chief Minister E Palaniswamy’s faction with a twist.

Both sides have formed a seven-member committee each, which will hold negotiations on tricky issues like whether Mr Palaniswamy will continue as Chief Minister or Mr Panneerselvam will return to the post he was forced to quit in February by AIADMK chief VK Sasikala, now in a Bengaluru jail for corruption.

The E Palaniswamy faction – called the Sasikala camp till she was sidelined by her party last week to facilitate re-unity talks – has said it has no pre-conditions to begin discussions. The O Paneerselvam or OPS Team has said it has two, both non-negotiable. They want a CBI investigation into former Chief Minister J Jayalalithaa’s death and they want to see the resignation of Ms Sasikala as party chief and that of her nephew and deputy TTV Dinakaran.

“If someone has to sacrifice for the welfare of the party, let it be me. I am ready to forego my portfolios for them,” Mr Jayakumar said on Sunday. It was seen as an indication that the Chief Minister’s post is not up for offer. Mr Panneerselvam was finance minister in the government of Ms Jayalalithaa.
The OPS camp, insiders say wants not only the chief minister’s post for its leader but also that of AIADMK chief.”The majority Edappadi K Palaniswamy government will complete its full term,” asserted another minister DC Sreenivasan.
The effort to patch up stems from the need to retrieve the AIADMK’s famous Two-Leaf symbol, suspended by the Election Commission after both factions staked claim to it. The Chief Minister’s camp last week agreed to sacrifice VK Sasikala and TTV Dinakaran and keep them away from the party and government.

But Mr Dinakaran has refused to resign till he meets his aunt Ms Sasikala. Today he will be questioned by the Delhi Police for the third day over an alleged attempt to bribe election commission officials through a middle man for the party symbol.

The party had split in February weeks after Ms Jayalalithaa, the AIADMK’s sole leader died. Her closest companion of three decades VK Sasikala was made AIADMK General Secretary and soon attempted to become Chief Minister too, unseating Mr Panneerselvam.
OPS revolted and had a wave of public opinion favour him over Ms Sasikala, bit could not swing the support of more than a handful of the party’s lawmakers. Ms Sasikala’s chief ministerial ambitions ended when the Supreme Court convicted her in a corruption case and ordered her to jail. Before she left, she re-inducted her nephew Mr Dinakaran, who was expelled by Ms Jayalalithaa, and made him the party’s number 2. She also ensured that her proxy E Palaniswamy became Chief Minister.
0000000000000 AIADMK factions led by Tamil Nadu Chief Minister K Palaniswami and his predecessor O Panneerselvam are expected to begin formal talks for reunion on Monday.Today’s talks comes three days after they formed their respective committees to hold discussions.
Rajya Sabha MP R Vaithilingam will head the panel set up by the Palaniswami group, while the Panneerselvam camp has named senior leader and former minister KP Munusamy as the head of a seven-member committee.

Informal talks between the two camps appeared to have hit a roadblock last week with the Panneerselvam camp seeking formal expulsion of VK Sasikala and her nephew TTV Dinakaran from the party.It had also sought a CBI probe into the circumstances leading to former chief minister Jayalalithaa’s death on December 5 last year.
Hardening its stance, the OPS camp had also demanded that 30 members of the Sasikala family be formally expelled from the party.
Following the Cabinet’s revolt against him early this week, Dinakaran had said he was “stepping aside” in the interest of the party.
He was questioned by the Delhi Police in the national capital on Saturday and Sunday in connection with an alleged attempt to bribe an Election Commission official to swing the fight over the ‘election symbol’ in his favour.(With PTI inputs)