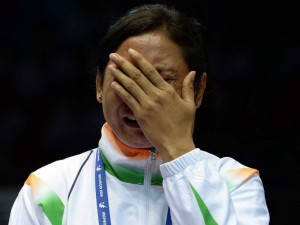 Boxer Sarita Devi, who refused to accept her Asian Games bronze medal in a protest over the judging can expect a heavy punishment, the head of the sport’s governing body AIBA said on Wednesday. The world body has hinted that Sarita’s international career may be over.
L. Sarita Devi lost in the semifinals of the women’s lightweight competition at Incheon, South Korea, in September, and tried to give her medal to her opponent at the presentation ceremony as a protest. Devi and three coaches received indefinite bans taking in the current women’s world championships in South Korea pending a final ruling of a disciplinary commission. AIBA president CK Wu said that the commission will make its ruling “very soon” and forecast a strong penalty.
“She will be heavily punished, there will be zero tolerance. It was totally unacceptable behaviour for any competition in any sport, I think her boxing career is finished. Every athlete should fully respect the decisions of referees and judges. So this boxer is facing very severe punishment. She has damaged her own country, India has been damaged,” Wu said in a telephone interview from Jeju, South Korea, ahead of the AIBA congress.
“If you accept being the winner, you have to accept being the loser. If everyone behaved like that, what type of competition will we have?,” he added.Devi, upset about the decision in the 60-kilogram bout, refusing to bend down to let the medal be placed over her neck. She then took the medal and slipped it onto the neck of Park Ji-na, who had been declared the winner of their semifinal bout.The South Korean boxer, an eventual silver medalist, tried to give the bronze medal back to Devi, then left it on the podium.