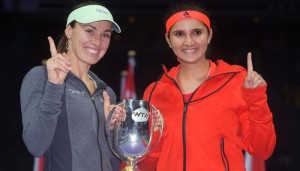 SINGAPORE: Indo-Swiss tennis combine of Sania Mirza and Martina Hingis struck gold one more time this year by clinching the women’s doubles title of the WTA Finals here on Sunday.

The top seeds beat Spanish eighth seeds Garbine Muguruza and Carla Suarez Navarro 6-0, 6-3 in an hour and seven minutes on the hard courts of the Singapore Indoor Stadium.

The WTA Finals is an annual event played by the top-8 players/pairs of the year who are divided into two round robin groups — red and white. The top two of each group progress to the semi-finals and the winners to the finals.

The championship is generally considered the fifth most prestigious event on the women’s tour after the four Grand Slam tournaments. It also has the largest prize money and ranking points after the Grand Slams.