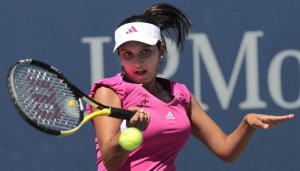 “Two years ago, I told myself that I want to become World No. 1, win a Grand Slam title (in women’s doubles) and also win the WTA Finals. That’s one down, two more to go. I am at the peak of my career and I want to achieve the remaining goals.
Those were Sania Mirza’s words to dna in October last year. She and Zimbabwean Cara Black had just won the season-ending tournament in Singapore. Nearly six months on, Mirza has kept at it. On Sunday, she ticked another box by scaling the No. 1 peak in the world of tennis, thereby becoming only the third Indian after Leander Paes and Mahesh Bhupathi (1999) to do so.
That’s not all. Mirza also made it a rollicking fortnight for Indian women by following badminton ace and fellow Hyderabadi Saina Nehwal to occupy the top spot in her sport. For the record, she upstaged Italians Sara Errani and Roberta Vinci. The rankings will be updated on Monday.
Combining with Swiss great Martina Hingis, Mirza got the better of Australia’s Casey Dellacqua and Croatia’s Darija Jurak 6-0 6-4 in the final of the Family Circle Cup in Charleston, USA. The Indo-Swiss pairing has now won 14 straight matches — five at Indian Wells Masters, five at Miami Masters and four in Charleston.

“It’s a dream for every kid to be No.1 one day,” Mirza said at the trophy ceremony. “I can’t think of a better person to do it with. When we came here we had one thing in mind, to get No.1, and she really helped me get there.
She helped me through some tough moments this week. She’s just a great person and a great player. We also become the No.1 team in the world today with this. I hope we have many, many more tournaments and end the year on a high as well,” added Mirza, who has won seven WTA doubles titles over the last 12 months.
Mirza went on to praise Hingis, herself a former World No.1. “I don’t want to make you feel old, but I did watch you as a kid!” she said, drawing laughter from Hingis and the crowd.
“You were an idol to most young girls at the time. You made it when you were 15! No tournament has been as special to me as the Family Circle Cup and no tournament will ever be as special to me, because I became No.1 here,” added Mirza, who became just the 33rd woman to hold the No. 1 ranking since the WTA introduced them in 1984.
After not even losing a set in their first two tournaments together, Hingis and Mirza were tested in Charleston where they dropped a set each in the quarterfinal and semifinal. Why, they even faced a match point against Anabel Medina Garrigues and Yaroslava Shvedova in the semifinal.
Sunday’s win helped also helped the Indo-Swiss pair secure the No.1 spot on the ‘Road To Singapore’ doubles leaderboard. Mirza also became only the fourth Asian woman to become World No. 1 after Japan’s Ai Sugiyama, China’s Peng Shuai and Chinese Taipei’s Hsieh Su-Wei.