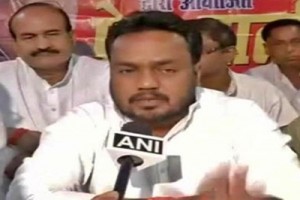 PATNA: Police on Sunday said they were on the lookout for Samajwadi Party’s Bihar president Ramchandra Singh Yadav, accused of taking Rs.10 lakh bribe for a ticket to contest the upcoming assembly polls, and he will be arrested soon.
Rashtriya Janata Dal legislator Surender Yadav, who is accused of demanding money from a contractor and threatened him with dire consequences if he did not pay up, will also be arrested, police said.

Patna Senior Superintendent of Police Vikas Vaibhav said the two have been charged in two separate criminal cases lodged against them.Superintendent of Police Chandan Kushwaha said police teams have raided a few places to arrest both of them.
According to police, Ramchandra Singh Yadav was booked on Friday on charges of criminal breach of trust, cheating and criminal conspiracy under relevant sections of the Indian Penal Code.
A case was filed against him by Kumar Venkatesh at Shastri Nagar police station in Patna.
Ramchandra Singh Yadav has refuted the allegations.On the other hand, a contractor filed a case against RJD legislator Surender Yadav from Belaganj assembly constituency, for demanding money and threatening the contractor with dire consequences if he failed to pay.
Surender Yadav, who is contesting the polls as an RJD candidate from Belaganj in Gaya district, has also refuted the allegation.