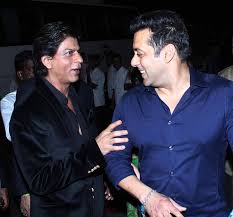 MUMBAI: Shah Rukh Khan and Salman Khan have been in the business for around two and half decades now and their Khan dosti has stood the test of time. After a public fallout, the two again became friends and ever since then, their rekindled dosti has been the talk of the town. Now we hear Salman is organising a special screening of his film for SRK.

After SRK tweeted Salman’s ‘Bajrangi Bhaijaan’ poster, everything seemed to be cool between the two actors. “Being a Brother is more important than being a HERO,” SRK had written while tweeting the first look poster of the film. At a recent event, Shah Rukh also commented, “I did it because I really liked the poster, the way it was shot with only Salman’s half-face and lips visible. Also, I have watched the trailer too and I really liked it.”
Salman, too has taken a lot of stands for SRK on many regards and has always been supportive of his buddy bhai. Extending love to the Badshah, our Dabangg Khan will be getting a special screening of Bajrangi Bhaijaan in place, specially for King Khan. While there have been numerous times in the recent past where we have seen the two Khans together, this would be another special moment in Bollywood.
This also puts rumours of the reported clash of egos to rest. SRK’s Raees and Salman’s Sultan have both eyed on an Eid 2016 release but SRK clearly affirmed that it’s not a clash. “For you guys, it might be a clash. For me and Salman, it’s not. We are friends so we have decided to do everything together and hum log picture bhi ab saath saath nikalenge,” SRK had said.