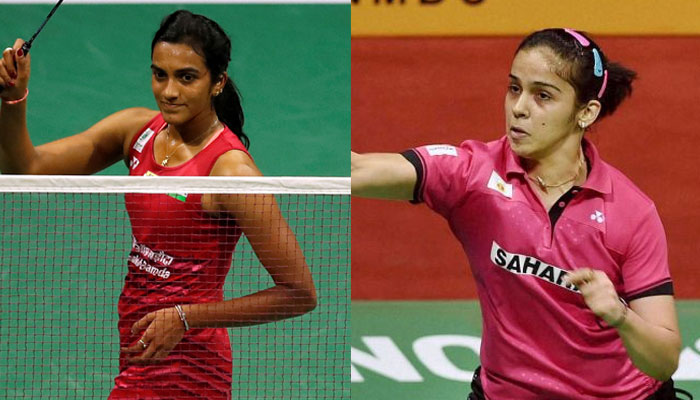 NEW DELHI : Though Kidambi Srikanth couldn’t continue his journey in the Badminton World Championships after getting knocked out by World No. 1 Son Wan Ho, Saina Nehwal and PV Sindhu made their way into the semi-finals on Friday, confirming at least two bronze medals for India.

Saina, who defeated 16th seed Kirsty Gilmour 21-19, 18-21, 21-15 in an hour and 14 minutes, will face Japanese seventh seed Nozomi Okuhara on Saturday for a place in the final. Okuhara ousted two-time defending champion Carolina Marin of Spain with a 21-18, 14-21, 21-15 victory in an hour and 33 minutes.
Saina, who was playing her seventh consecutive quarter-finals at the World Championships, reached the semi-finals for the second time in the prestigious tournament. Sindhu will now take on Chen Yufei of China, who entered the semi-final after beating eighth seed Ratchanok Intanon of Thailand 14-21, 21-16, 21-12.
Continuing her good run, the Indian won her quarter-finals match in a rather straightforward manner against fifth seed Sun Yu of China 21-14, 21-9. “Well I am happy with the way I have played today and I am pleased with the results. Even though I won, I must admit that Sun Yu is not an easy player to play against and the last time I played against her I lost to her (In Dubai 2016),” Sindhu said after the match.

Along with Sindhu and Saina, Srikanth also looked to make his way into the semi-finals but was beaten by top seed Son Wan Ho of South Korea 21-14, 21-18 in 48 minutes. Srikanth never looked in the contention in the first game as the South Korean star outplayed him in every department. But in the second game, Srikanth gave some fight before surrendering.
(With IANS inputs)