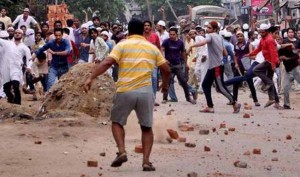 SAHARANPUR (UP) : Leaders from different political parties started a blame game hours after a five-member probe team, formed to investigate the communal clashes in Saharanpur that claimed three lives last month, submitted its final report to Uttar Pradesh Chief Minister Akhilesh Yadav.
Sources said the report has named BJP MP Raghav Lakhanpal for inciting the riots. The report also blames the district administration and the police for not acting in time to prevent the clashes. Rajnath Singh, union home minister, said, “It is a report by their own political party. I have nothing to say as I have not even seen the report.”
The clashes had left over 30 injured apart from the three persons who died. The fighting had broken out over a small plot of land next to a gurudwara that members of the Sikh community began construction on. Local Muslims claim that land belongs to a mosque. 165 shops and hand carts were set ablaze along with 42 vehicles during the clashes. The probe report said that as the holy month of Ramzan was going on, the administration should not have allowed any construction at the disputed site or members of opposite community to assemble.
Naresh Aggarwal, senior SP leader, defended the probe report. “Report makes it clear that the riots took place due to callous behaviour of the officers on duty. I appeal to the CM to take strict action against them,” said Mr Aggarwal.Mayawati, chief of the Bahujan Samaj Party, blamed both the Samajwadi government and the BJP for the clashes.”We do not agree with the probe committee report. Peace and harmony was destroyed after SP came to power. But after BJP came to power at the centre, it has gone worse,” said Mayawati.