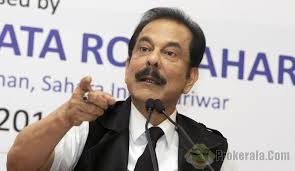 NEW DELHI : Indian tycoon Subrata Roy is putting up the two trophy properties and another luxury New York hotel for sale to raise $1.6 billion (Rs. 10,000 crore) for the bail bond that will get him out of Tihar, a sprawling New Delhi prison complex that houses about 12,000 inmates.
About a minute’s walk from the headquarters of the prison, Mr Roy now has a 600 square feet (56 square metre) office where he can hold video conferences and receive visitors to try and sell or mortgage the hotels, say prison officials.In a small adjoining room, there are three beds for Mr Roy and two associates who have also been jailed.
“They are happy, they can now talk to known people all day,” said one Tihar official, who described the setup to a Reuters reporter visiting the prison. “He is very satisfied with the arrangement.””Our work will be done now,” Mr Roy told a senior prison officer after moving to the new office-cum-cell, according to the official.
Entry to the office was not possible because Mr Roy was inside and contact with prisoners is prohibited without permission. Three guards stood by an unlocked metal gate before the building, one stood on the roof and one patrolled its grounds.
It’s a race against time for the 66-year-old head of the Sahara conglomerate: Under a deadline set by the Supreme Court, Mr Roy has just a few days left to post the Rs. 10,000 crore in cash and bank guarantees that would secure his release.
The only higher bail ever appears to be a $3 billion bond set by a judge in Texas in 2004 for a wealthy fugitive, although that was reduced to $450,000 on appeal.
Mr Roy was jailed in March after he failed to appear at a contempt hearing in the long-running dispute with the capital markets watchdog over the company’s failure to repay billions of dollars to investors who were sold outlawed bonds.He is yet to be charged over the dispute and denies any wrongdoing. His Sahara group has vast real estate, media and hotel interests, part-owns a Formula 1 team and used to sponsor the Indian cricket team.
Glittering prizes
One asset that could raise quick cash is the landmark New York Plaza Hotel – a 107-year-old luxury property that overlooks Central Park. Studded with chandeliers, the hotel’s decor recalls the Great Gatsby era.Jointly owned with the Saudi Arabia-based Kingdom Holdings, the Plaza offers an overdose of luxury for guests in its 282 rooms, from round-the-clock butlers to in-room iPads for booking a restaurant or requesting a wake-up call.
Its 4,490 square-foot Royal Suite has three bedrooms, three bathrooms, a dining room for 12, a kitchen, a gymnasium, a grand piano and a library. It costs $30,000 a night.
Sahara bought the Plaza for about $570 million in 2012. Two years earlier, it paid 470 million pounds ($790 million) for the 494-room Grosvenor House opposite Hyde Park and just a stone’s throw from Buckingham Palace. Opened in 1929, it houses the Great Room, which is one of Europe’s largest banqueting halls and can seat 2,000 guests.Sahara is also seeking to sell the Dream Hotel in New York’s midtown Manhattan.
In Tihar, the office given to Mr Roy has a conference room with a big table, office chairs, and Wi-Fi and video conferencing facilities, said the prison official, who declined to be named as he was not authorised to speak to the media.Mr Roy and his two associates sleep in a tiny adjoining room get meals from the prison canteen and have to use shared toilets.
The complex is under round-the-clock video surveillance, with people allowed to visit from 6 am to 8 pm.
Mr Roy received four or five visitors on one day last week and local media said they included representatives of prospective buyers.”All options are being explored. It can be an outright sale or mortgage lien. Phone calls are being made to interested parties, and things will become clear by early (this) week,” said a source with direct knowledge of Sahara’s position.”The response has been good so far. There have been some inquiries by investment funds in the Middle East and other places,” said the source, declining to give names of the bidders who have shown interest.
The Supreme Court has given Mr Roy 10 working days from August 5 to complete any sales, setting a deadline of Monday. The source said that may not be enough and that Mr Roy may ask the court to extend the deadline.”Due diligence has to be done, all the negotiations have to be completed and the deal has to be signed. All these take time,” he said. “Sahara cannot do a distressed sale of these properties.”
The source declined to be named as the deal talks are not public. Sahara did not respond to an e-mail requesting comment submitted by Reuters.One of its main businesses is the sale of financial products, largely to small investors in towns and rural areas. It was two such products, later ruled illegal, that drew the market regulator’s attention.
Mr Roy, who is outside mainstream corporate India, has often been photographed with senior politicians, cricketers and Bollywood stars.
Based in Lucknow, the capital of Uttar Pradesh, Mr Roy calls himself “managing worker and chairman” of Sahara and chief guardian of the “world’s biggest family”, overseeing businesses with almost a million staff and agents.Industry consultants said trying to sell the hotels from inside a prison was unlikely to dampen the appetite of buyers for the prestigious New York and London hotels.”The properties are quite iconic and would be sold at the right price,” said an international property consultant who did not wish to be named.(Reuters)