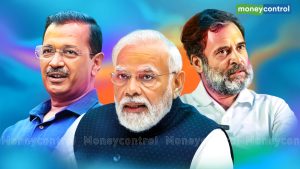 NEW DELHI : The Bharatiya Janata Party has yet again triumphed in Gujarat, keeping the old traditions alive in the Western state. Heading for a two-thirds majority, the Bharatiya Janata Party (BJP) is poised to return to power in Gujarat for a record seventh straight term. Prime Minister Narendra Modi, along with other senior BJP leaders reached BJP headquarters in Delhi and addressed the nation after the historic win.
Congress meanwhile slipped into political oblivion in the state, with less than 20 seats. The grand old party, however, bagged the crown for Himachal Pradesh, winning 40 of the 68 seats. Aam Aadmi Party, which had contested on 67 seats, failed to open account. The AAP has managed to gain a foothold in the state, and also garner enough votes to become a national party. Though it trails behind the BJP and the Congress, the AAP story is consequential as it has dragged the Congress’s vote share to below 30 per cent for the first time in decades. The hill state has not voted any incumbent government to power since 1985.
The enduring sway Prime Minister Narendra Modi has on the Gujarati consciousness has led the BJP to the best-ever tally for any party in the state assembly polls, reducing to insignificance people’s perceived discontent with issues like inflation and local leadership. In his barnstorming campaign across the state in which he addressed 31 rallies and led three road shows, Modi travelled through various regions of his home state, urging voters to make “Bhupendra break the records of Narendra”, an exhortation for a higher tally for the Chief Minister Bhupendra Patel-led government than what he had got while helming the state for nearly 13 years. And it is evident that voters have listened to him.
BJP’s core group meeting underway at party headquarters in the presence of Prime Minister Narendra Modi, Party president JP Nadda, Union Home Minister Amit Shah, Defence Minister Rajnath Singh, party’s national General Secretary BL Santosh and other leaders, news agency ANI reported quoting sources.
“BJP is capable of taking big and tough decisions for the welfare of people. This time Gujarat has shown a tremendous response to our spirits for development. I had told the people of Gujarat that this time Narendra’s record should be broken. I promised that Narendra will work hard so that Bhupendra can break Narendra’s record. Gujarat has broken all records by giving the biggest mandate to BJP in the history of Gujarat,” said PM Modi
The Congress party that has been facing setbacks throughout the country managed to gain victory in 39 seats in Himchal Pradesh, a clear majority in the 68-member Assembly. On the other hand the Bharatiya Janata Party riding high on the wagon of popularity of Prime Minister Narendra Modi had to come down from its tally of 44 to 26.
Skimming through past 5 assembly elections in the hill state of Himachal Pradesh, there has been a toggle in the government’s majority between Bharatiya Janata Party and Congress. All the election from 1998, 2003, 2007, 2012, and 2017 have witnessed majority of a different party each time. So statistically, anti-incumbency in the hill state was most plausible this year too but this is only the tip of the iceberg.

There are many more reasons behind the defeat of the BJP and victory of Congress in the hill state.The Congress wrested Himachal Pradesh from the BJP as it crossed the majority mark of 35 seats in the 68-member Assembly in the hill state which maintained its tradition of not voting any incumbent government to power since 1985. Congress is all set to form a new government in the state soon. Himachal Pradesh has not returned any incumbent government to power after 1985, a trend the ruling BJP, powered by Prime Minister Narendra Modi’s personalised campaign, hopes to break. Polling for 68 assembly seats in Himachal Pradesh was held on November 12, with the state recording a 75.6 per cent turnout, breaking the 2017 record.
As the BJP registered a landslide victory in the state assembly elections on Thursday, Prime Minister Narendra Modi thanked the people of Gujarat for supporting the politics of development and delivering “phenomenal election results.” Making a sort of tongue twisting remark on record victory of BJP with Chief Minister Bhupendra Patel as the face, PM Modi said, “I had told the people of Gujarat that this time Narendra’s record should be broken. I promised that Narendra will work hard so that Bhupendra can break Narendra’s record. Gujarat has broken all records by giving the biggest mandate to BJP in the history of Gujarat.”
BJP leader Bhupendra Patel who holds the chair of Gujarat’s Chief Minister is going to retain his post for another term. Modi also lauded party workers in the state, saying each of them is a champion.”This historic win would never be possible without the exceptionally hard work of our Karyakartas, who are the real strength of our Party,” he said. “People blessed the politics of development and at the same time expressed a desire that they want this momentum to continue at a greater pace. I bow to Gujarat’s Jan Shakti,” he said in a tweet. The BJP received 53% of the votes that were counted in Gujarat, followed by the Congress with 27% and the AAP with 13%, according to data from the Election Commission of India. In the 182-member state Assembly, the BJP had won 147 seats and was in the lead in nine others.