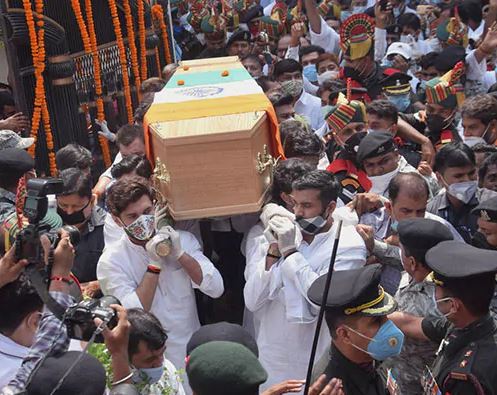 PATNA: Union Minister Ram Vilas Paswan was given a state funeral and cremated at Patna’s Janardhan Ghat on Saturday afternoon. His son and LJP chief Chirag Paswan performing the last rites. 74-year-old Ram Vilas Paswan had died in Delhi hospital on Thursday after undergoing a heart surgery.
A sea of people could be seen, besides dignitaries led by Bihar Chief Minister Nitish Kumar and Union Minister Ravi Shankar Prasad, at the cremation site on the banks of the Ganges in the city that has been a witness to Paswan’s long journey – from a young MLA of the socialist party in the late 1960s to having served under six prime ministers.
A large number of supporters had come to the Digha ghat from his pocket borough Hajipur, situated right across the river, which Paswan had nurtured since his Lok Sabha debut in 1977 when he won with a record margin.
The body was brought for the last rites to Janardan Ghat in the Digha locality in a massive procession from his residence in Shri Krishna Puri, about 3 km away. Reena Paswan, who like her husband Ram Vilas was always a perfect host, watched the ceremony from a distance, the grief on her face concealed with her mask and a dupatta
Several leaders, including Bihar Chief Minister Nitish Kumar, Deputy CM and BJP leader Sushil Kumar Modi, Leader of Opposition in the Assembly, RJD leader Tejashwi Prasad Yadav, Union Law Minister Ravi Shankar Prasad and Union Minister of State for Health and Family Welfare Ashwini Kumar Choubey paid their last respects to the leader.
Ram Vilas Paswan was one of the most prominent Dalit leaders of the country ,was a minister in union governments headed by parties of contrasting ideological persuasions, ranging from the Janata Dal to the Congress and the BJP, since 1989.
Whoever might be his ally, he took pride in describing himself as a socialist and secular politician by conviction. He served as a minister in governments headed by V P Singh, H D Deve Gowda, I K Gujaral, Atal Bihar Vajpayee, Manmohan Singh and now Narendra Modi.
A powerful Dalit leader from Bihar, Mr Paswan was among those leaders – along with Lalu Yadav and Nitish Kumar – who were inspired and nurtured by the JP movement in the 1970s.

President Ram Nath Kovind, Prime Minister Narendra Modi and Congress MP Rahul Gandhi were among the many people who paid rich tributes to Mr Paswan, who was widely praised as someone who managed to maintain friendly relations with opposition leaders.

Chirag Paswan posted a throwback photograph of him as a young boy in his father arms with this message: “Papa… Now you are not in this world but I know you are always with me wherever you are. Miss you Papa”.
(Bureau Report with Agency Inputs).