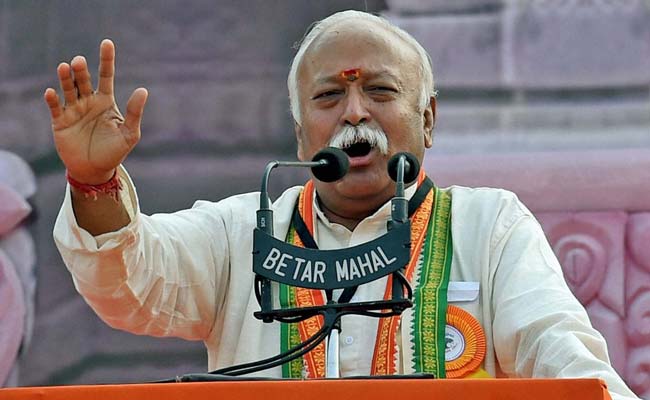 NEW DELHI : Rashtriya Swayamsewak Sangh (RSS) chief Mohan Bhagwat said on Tuesday that“In every field of life, decency should be maintained. We do not support aggressive individuals who troll; there should be a decent debate.  trolling  posting false or insulting messages on social media — amounted to “hitting below the belt”, and his organisation did not support those who “display such an aggressive behaviour”
The participants included representatives of the European Union, but those of the Pakistan High Commission said they were not invited. Union Minister of State for Civil Aviation Jayant Sinha moderated the interaction organised by India Foundation, a think tank that espouses right-of-centre views, which has BJP general secretary Ram Madhav as one of its directors.

Over breakfast at Delhi’s Claridges Hotel this mornin. , RSS chief Mohan Bhagwat explained the organisation to , answering questions like – does the RSS control the BJP and the government.
No it doesn’t, Mr Bhagwat told the gathering, which included several ambassadors, sources said. He said the RSS, which is the BJP’s ideological mentor, doesn’t run the BJP as the BJP doesn’t run the Sangh. “As Swayamsevaks, we consult and exchange notes, but are independent in functioning,” he said.

“There were many questions about the usual misconceptions about the RSS. Do they control the party and the government? The Sarsanghchalak explained to them how it is not a political but a social organisation,’ said an invitee who attended the meeting.  While the event was not open to the media, we spoke to some of the participants. They said it began with a short address by Mr. Bhagwat, followed by a question-and-answer session in English.
“The response on trolling was to a question whether or not the RSS supported such a behaviour,” a senior diplomat said. Most diplomats said no questions were asked about the murder of journalist Gauri Lankesh or the RSS view on India’s relationship with China and Pakistan.

Mr. Bhagwat was asked if he saw a solution to the Ayodhya dispute by the next elections and if he would consider it a shared site. He replied there would be a court ruling and the RSS would abide by it. There were questions about the RSS’s relationship with the BJP, considered its political wing. “The Sangh [the RSS] doesn’t run the BJP, the BJP doesn’t run the Sangh. As Swayamsewaks, we consult [each other] and exchange notes, but are independent in functioning,” he said.

He was asked about Hinduism and what it meant to be a Hindu. When someone says I am a Hindu, it is not about religion or how one lives. It is about accepting others as they are. Hinduness is free from this ‘ism’. Hinduness is the ever-changing quality of Hinduism,” he said.

Another source present at the meeting said Mr. Bhagwat spoke about the work done by the RSS in health, education and rural development, and asked the diplomats to visit the projects to make their own assessments. Mr Bhagwat  invited them to attend the organisation’s shakhas or camps and “experience the Sangh culture.” He said the RSS has 1.7 lakh social projects that work to alleviate poverty and also invited them to see the work that the organisation is doing. (With Agency Inputs ).