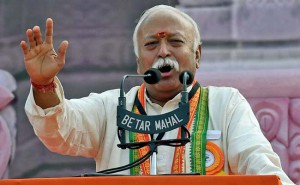 BHARATPUR(Rajasthan):Mohan Bhagwat, the chief of Rashtriya Swayamsevak Sangh, has reportedly indicated that converting people to Christianity was the main objective behind Mother Teresa’s service to the poor, news agency Press Trust of India has reported.
“The service may be good, but there’s a motive behind it. The idea is to make the person feel obligated, so that they become Christians,” he reportedly said at a function organised by NGO Apna Ghar near Bharatpur.
“The question is not about conversion but if this (conversion) is done in the name of service, then that service gets devalued,” PTI quoted him as saying.Drawing comparison with the non-profit’s service, he said, “Here, the objective is purely service of poor and helpless people”.
The RSS chief was addressing a function in village Bajhera, around 8 km from Bharatpur, where he inaugurated ‘Mahila Sadan’ and ‘Sishu Bal Grah’ in the NGO for helpless women and children.The RSS is the ideological mentor of the BJP, and the comments are expected to draw controversy.
The Missionaries of Charity – the organisation started by Nobel peace laureate Mother Teresa – is involved in charity work across India.
The Christian community had recently criticised the string of attacks on churches in Delhi, which it alleged, had been orchestrated. Earlier this month, priests, nuns and parishioners clashed with police as they staged a protest near the biggest cathedral in Delhi over the attacks.
Last week, the home ministry stepped in, ordering the police to bring the culprits to book. Prime Minister Narendra Modi, too, spoke out on the issue, saying his government “will not allow any religious group, belonging to the majority or the minority, to incite hatred against others, overtly or covertly”.