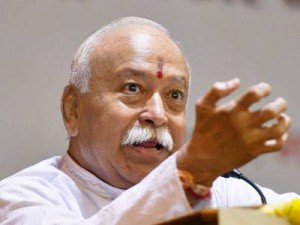 NEW DELHI: Amid the continuing Patel quota stir in Gujarat, Rashtriya Swayamsevak Sangh chief Mohan Bhagwat on Sunday pitched for a review of the reservation policy, contending it has been used for political ends and suggesting setting up of an apolitical committee to examine who needs the facility and for how long.
Mr. Bhagwat said though “interest groups” do get formed in democracy, aspirations of one section should not be met at the cost of others. “Interest groups are formed because we have certain aspirations in democracy. At the same time, we should remember that through interest groups we should not strive to address those aspirations at the cost of others.
“We should have integral approach of welfare for all. It is sensible to realise that my interest lies in larger national interest. The Government also has to be sensitive to these issues that there should not be any agitations for them,” Mr. Bhagwat told Sangh mouthpiece Organiser and Panchjanya in an interview.
He pitched for constitution of a committee with representatives from the civil society to go into the issue.“We believe, form a committee of people genuinely concerned for the interest of the whole nation and committed for social equality, including some representatives from society, they should decide which categories require reservation and for how long.
“The non-political committee like autonomous commissions should be the implementation authority; political authorities should supervise them for honesty and integrity,” he said.
Arguing that the policy of reservations based on social backwardness being extended now is not in line with what the makers of the Indian Constitution had in mind, Mr. Bhagwat said had quotas been implemented as per the vision of the Constitution makers questions on the issue would not have surfaced. “ Since inception the policy has been politicised,” he said.
Mr. Bhagwat’s remarks come in the wake of violent protests by the Patel community in Gujarat who are demanding a share in the OBC reservation pie.

Amid accusations being levelled against the Modi government of attempts to saffronise education, Mr. Bhagwat said the education policy needed changes based on “truth and authenticity” and that there be should be minimal interference from those in power.

Education policy should focus on the making of good and motivated teachers, for which, interference of people in power in the field of education should reduce, he said.