NEW YORK: President Barack Obama has said the Republican Party is threatening voting rights in America more than at any point since the passage of a historic 1965 law expanding rights at the ballot box to millions of black Americans and other minorities. 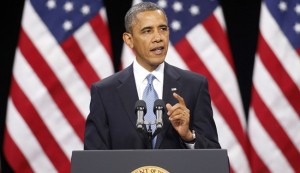 Obama’s critique of Republicans came as he seeks to mobilise voters ahead of the November midterm congressional elections, when Democratic control of the Senate is at stake. Many in Obama’s party fear state voting requirements and early balloting restrictions will curb turnout that is critical to Democratic hopes of prevailing.
“The stark, simple truth is this: The right to vote is threatened today in a way that it has not been since the Voting Rights Act became law nearly five decades ago,” Obama said in a fiery speech at civil rights activist and television talk host Al Sharpton’s National Action Network conference.
It was the second day in a row that America’s first black president has delivered a speech about race, an issue that has not often been at the forefront of his agenda. Obama has faced criticism from some African-Americans for doing too little to help minorities, but he has focused more acutely on inequality in his second term.
On Thursday, Obama marked the 50th anniversary of the Civil Rights Act, the landmark law that ended racial discrimination in public spaces. At the LBJ Library in Austin, Texas, he praised President Lyndon Johnson for his understanding of presidential power and his use of it to create new opportunities for millions of Americans.
Johnson, the Democrat who became president after the assassination of John F. Kennedy, signed the Civil Rights Act into law in 1964 and the Voting Rights Act a year later.
For the remainder of the year, no political issue stands out more prominently for Democrats than their ability to motivate voters to turn out at the polls in the November midterm elections. A Republican takeover of the Senate would crush Obama’s already limited ability to push his agenda through Congress. The Republicans are virtually certain to keep their majority in the House of Representatives, but the fight for the Senate is expected to be tight.
Turnout by Democrats has been traditionally weak in elections when the White House is not at stake. That, coupled with efforts in some states to limit early voting and to enact voter identification requirements, has prompted Obama and his party to raise alarms and step up their get-out-the-vote efforts.
The president vowed that he would not let the attacks on voting rights go unchallenged, but he offered no new announcements of specific actions his administration planned to take.