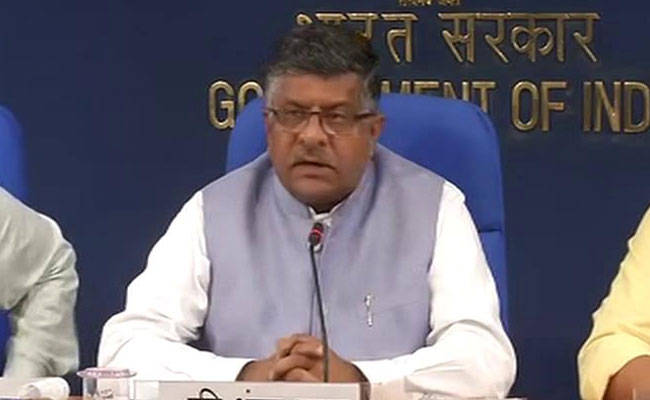 NEW DELHI : The government on Thursday hailed the Supreme Court verdict that declared the right to privacy is a fundamental right under the Constitution. Law and Justice, Information Technology Minister Ravi Shankar Prasad said, “The government was of the view that the Right to Privacy should be a fundamental right and we welcome the Supreme Court verdict.”

He asserting that the judgment by a nine-member bench affirms the government’s position. It was the first government response to what critics have called a massive setback for it after it argued in court that the constitution does not guarantee individual privacy as an inalienable fundamental right.

But Mr Prasad said the government’s view is consistent that right to privacy should be fundamental, also reading from judgments of the different judges on the Supreme Court bench to underscore that they acknowledged privacy “is not an absolute right, it must be subject to some reasonable restrictions.”

“Much before the creation of the nine-judge bench, the government, while moving the Aadhaar Bill in Parliament had clearly said that right to privacy is fundamental, flowing from Article 21, subject to reasonable restrictions,” said Mr Prasad.

He quoted then Law Minister Arun Jaitley as having said in the Rajya Sabha, “Is privacy a fundamental right or not, the present bill presupposes and is based on the premise that it’s too late in the day to contend that privacy is not a fundamental right. I want to clear the misconception due to which these amendments are being proposed…it is contended and broadly is now accepted that privacy is a part of individual liberties.”
The minister also lashed out at opposition parties, particularly the Congress, for their criticism of the government after the judgement. “People from the Congress have been attacking us, the Left has joined them too. I would like to know what has been the Congress’ record when it comes to protecting individual liberties?” he said. Prime Minister Narendra Modi’s government, he said, is “led by leaders who have fought for individual liberties during Emergency.”

Congress president Sonia Gandhi has described today’s Supreme Court judgement as a “blow on unbridled encroachment” by the government. She said the Congress and other opposition parties had spoken in parliament “for the right to privacy and dignity of all Indians against the arrogant attempts of the present government to curtail them.”

“This is a blow to the government, because the government had argued that people do not have a right to privacy,” said senior lawyer Prashant Bhushan, who is involved in a large multi-party case against the mandatory use of Aadhaar identity cards as an infringement of privacy. There have also been concerns over breaches of data. Critics say the Aadhaar ID cards link enough data to create a comprehensive profile of a person’s spending habits, their friends and acquaintances, the property they own and a trove of other information.
Aadhaar, which over one billion citizens have already signed up for, was set up to be a secure form of digital identification for citizens, one that they could use for government services. But as it was rolled out, concerns arose about privacy, data security and recourse for citizens in the face of data leaks and other issues.
Over time, Aadhaar was made mandatory for income tax returns and operating bank accounts. Companies were also pushing to gain access to Aadhaar details of customers. Opponents say that its use for what are effectively essential services means their right to privacy is increasingly being violated. The government has said the Aadhaar programme poses no threat to civil liberties.

Earlier this year, then Attorney General Mukul Rohatgi rejected suggestions that Indians could refuse to provide their iris scans or fingerprints to the government, telling a court “the concept of absolute right over one’s body was a myth”.
In a landmark verdict, a nine-judge Constitution bench headed by Chief Justice Jagdish Singh Khehar held that the right to privacy is a fundamental right and is an integral part of the right to life and liberty. The bench was looking into a batch of petitions challenging the Centre’s move to make Aadhaar mandatory for availing benefits of various social welfare schemes.
EOM