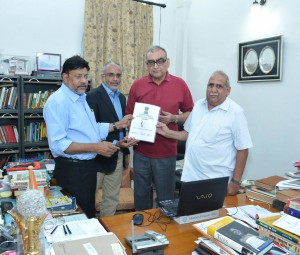 NEW DELHI : A three-member panel constitutedby Press Council of India has recommended that Telangana ChiefMinister K Chandrasekhar Rao be directed to restrain himselffrom making provocative statements against journalists.
The committee comprising journalists Rajeev Ranjan Nag, KAmarnath and Krishna Prasad was constituted by PCI ChairpersonJustice (retd) Markandey Katju to probe threats to the media
in Telangana after certain remarks reportedly made by Rao werebrought to the Council’s notice.While listing its findings, the panel noted that “theChief Minister of Telangana did make the statements attributedto him from a public platform that he
would break the necksand  bury media persons and that they should salute the
Telangana people if they wish to live in Telangana.”
The Committee said that by making these statements from apublic platform, theTelangana Chief Minister had violated theletter and spirit of Article 19 (1)(a(e)and(g) which pertainto freedom of speech and expression, freedom to reside andsettle in any part of India and practise any profession.TheCommittee recommended that PCI and Central Governmentshould impress uponRao that “blatant threats to the media andmedia personnel violates the oath of office he took to protectand defend the Constitution of India and follow the rule oflaw”
“The Chief
Minister of Telangana should be directed torestrain himself from making provocative statements againstjournalists or in saluting and supporting organizations whichseek to limit the flow of information to the people, on the
basis of nativity or domicile status,” the panel recommendedin its report.The report of the three-member committee was placed beforethe Press Council today and adopted, sources said.
The committee report also stated that Telangana Governmentshould be directed to take immediate action to createconditions and atmosphere where free and fair journalism canbe practiced by print and electronic media without fear of
retribution by the state or the “sword of business terrorism”by non-state actors.
It sought that all cases registered against journalistsfor participating in protest actions should be withdrawn orfast tracked.Prompt action should be taken against the police officialresponsible for attacking journalists and roughing up women
journalists at Hyderabad and Warangal, the committeerecommended.
The photographers and videographers whose equipment wasdamaged during thepolice action should be compensated, itsaid. The State should not discriminate against thejournalists on the grounds of their nativity, it added.The committee has recommended that the state governmentshould immediately take steps to enable MSOs to withdraw theirblackout of channels TV 9 and ABN Andhra Jyothy in the
interest of freedom of media and people’s right to know, asenshrined in the Constitution.It also recommended that print and electronic media
organisations must put in place sterner mechanisms for greatereditorial scrutiny of public interest journalism.The Committee, in its report stated that it soughtappointments with Telangana Chief Minister, the ChiefSecretary and the Director General of Police to elicit theirviews on the points of reference made to the committee.They (Committee) waited on both days for the confirmation
of appointments but to no avail, the report said. PTI