BHAVNAGAR: (GUJARAT) On camera, at a gathering in a house in Bhavnagar in Gujarat, Pravin Togadia is seen offering advice on how to prevent Muslims from buying property in areas where Hindus are in the majority. “We should have it in us to take the law in our own hands in an area where we are a majority and scare them,” Mr Togadia says. 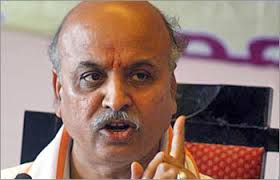 Mr Togadia, a leader of the Vishwa Hindu Parishad or VHP, denied making hate remarks. “Some people gathered and told me that Muslims are forcibly throwing us out, I asked them to take help of the police. The story is not about Muslims getting thrown out; it is about Muslims forcing Hindus out of their houses,” he said today.
The VHP is a key constituent of the Sangh Parivar, an umbrella of Hindu nationalist organisations that includes the BJP, whose Meenakshi Lekhi today said, “Togadia is not in the BJP. Those who speak without thinking and those who distort words both must be condemned.” The ideological parent of the BJP, the RSS, also maintained that Mr Togdia’s remarks were being misreported. The Election Commission has said it will investigate the controversy.
The footage from Bhavnagar shows Mr Togadia declaring, “Muslims have been buying Hindu properties at throwaway prices. How do you stop this?” As a solution, he offers, “You put pressure on the government to enforce the Disturbed Areas Act the way we have in cities like Ahmedabad.” The Disturbed Areas Act makes it tough to sell property to a member of the minority community in a neighbourhood to prevent communal tension and people who are in the minority from making distress sales.  But critics say the act has been misused to keep Muslims from owning property.
Mr Togadia tells the gathering that another option is to occupy a Muslim’s property by force and knit the owner in a legal case that could take years to resolve.
Though Mr Togadia was once close to Narendra Modi, the Gujarat Chief Minister who is now running for prime minister, over the last few years their equation has been a fractious one.