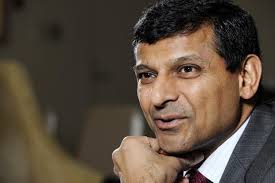 NEW DELHI : The Reserve Bank of India (RBI) on Tuesday held interest rate steady at 8 per cent, in line with expectations. Since taking office in September, Governor Raghuram Rajan has raised the repo rate three times by a total of 75 basis points or 0.75 per cent.The pause in interest rate hikes comes at a time when retail inflation has eased to a 25-month low, while wholesale inflation has eased to a nine-month low.
“If inflation continues along the intended glide path, further policy tightening in the near term is not anticipated at this juncture,” Dr Rajan said in his policy statement.Sajjid Chinoy, an economist at JPMorgan told media that the key takeaway from today is RBI’s primary target is restricting inflation at 6 per cent 20 months from now.
India’s consumer price index or retail inflation eased to 8.10 per cent in February, near the RBI’s January 2015 target of 8 per cent, while the wholesale price index slowed to 4.68 per cent. The RBI wants CPI inflation to ease further to 6 per cent by January 2016.Dr Rajan said there are upside risks to vegetable prices, which may lead to higher retail inflation. He also expressed concern about risks to growth in an economy expanding at under 5 per cent, its slowest in a decade. He said growth in 2014-15 is expected in a range of 5 to 6 per cent, with downside risks.
“Lead indicators do not point to any sustained revival in industry and services as yet,” Dr Rajan said.With India heading for elections running from April 7 to May 12, Dr Rajan had been expected to wait for a glimpse of the next government’s economic policies as well as the outlook for monsoon season rains that begin in June before making a policy move, economists said.The first forecast on monsoons is due on April 15.
Other policy highlights:
The cash reserve ratio (CRR) or the proportion of cash deposits that banks must keep with central bank, has been left unchanged at 4 per cent. The RBI, however, reduced the availability of overnight funds from its repo window for banks and increased the amount that banks may borrow from its term repo window in a bid to reduce lenders’ reliance on short-term central bank funding.
Market reactio
Markets had already factored in a pause in the policy, hence stock reaction was muted. The BSE Sensex traded flat at 22,396, while the broader Nifty hovered around the 6,700 levels as of 12.12 p.m.Rate sensitive stocks, however, underperformed the broader markets. Banking stocks traded 0.4 per cent lower, while realty stocks were down 0.25 per cent.