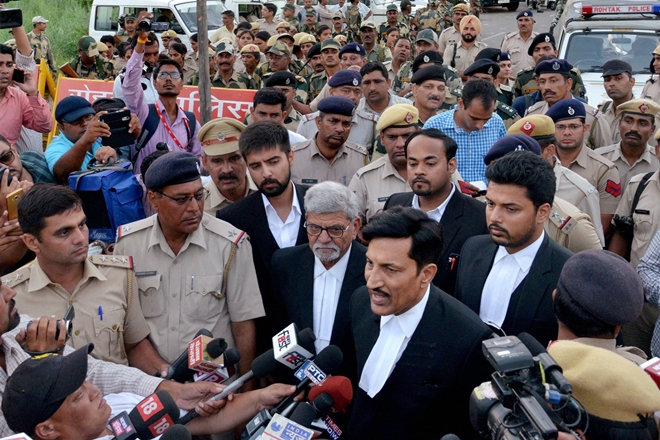 ROHTAK : Self-styled spiritual guru Gurmeet Ram Rahim Singh was today sentenced to 20 years in prison for the rape of two women followers in 2002, by a judge who flew by government helicopter to conduct court at a prison in Haryana’s Rohtak. The 50-year-old chief of the Dera Sacha Sauda sect sat on the floor and wept as he was sentenced. A
Sonment in the two rape cases registered by the Central Bureau of Investigation in 2002, apart from a fine of Rs. 15 lakh in each case. The rape victims, on whose testimonies the Dera Sacha Sauda chief has been convicted, will get Rs.14 lakh each from the fine amount for their rehabilitation.
The two women who accused Ram Rahim of raping them 15 years ago have sought more punishment for him and their lawyer asked investigators to probe dozens more alleged cases of abuse. The CBI has asked the court to consider a longer prison term for the Dera chief.

The 50-year-old chief of the Dera Sacha Sauda sect sat on the floor and wept as he was sentenced. Ahead of the judge’s order today, thousands of soldiers enforced a lockdown in Rohtak and other parts of Haryana and Punjab, where Ram Rahim has a mass following. His followers went on a deadly rampage after he was convicted on Friday, with 38 people killed and over 200 injured in the violence. There were no reports of violence today after Ram Rahim was sentenced.

“Having regard to the peculiar facts and circumstances of the case, as well as rival contentions, this court is of the view that if acts of convict in sexually exploiting his own female disciples and intimidating them of dire consequences, is taken note of, then such kind of person does not deserve any sympathy of the court,” said the court order.
The court said Ram Rahim had been charged under Section 376 (rape) and Section 506 (criminal intimidation) of the Indian Penal Code (IPC) keeping in view the entire facts and circumstances pertaining to both the victims. The sentences under Section 376 of the IPC shall run consecutively, the order said, holding that he would have to undergo a total of 20 years imprisonment.

Under Section 506 of the IPC, for each victim, the judge awarded two years rigorous imprisonment with a fine of Rs.10,000.”In case of default in payment of fine, further rigorous imprisonment of three months will have to be served,” said a CBI official. As the CBI special court judge, Jagdeep Singh, pronounced the sentence in the make-shift court located inside a school library in the Sunaria Jail complex in the late afternoon, Ram Rahim collapsed.
A chief medical officer of the district hospital was rushed in for his medical check-up, which did not indicate any major complication.After the court order, jail officials escorted Ram Rahim to a prison cell after seizing his personal belongings.  Earlier, the judge was flown down to the prison complex on board a helicopter around 2-30 p.m., as directed by the Punjab and Haryana High Court. Subsequently the hearing on quantum of sentence started.
The defence counsel argued for a lighter sentence, citing that Ram Rahim was into social service for the past several years and that he had sheltered and helped a large number of hapless people. He ran 133 welfare projects, encouraged people to marry even prostitutes and had played a commendable role in drug de-addication programmes. He suffered from three diseases, disc problem, blood pressure and high sugar level, said the counsel.
However, the prosecution pressed for maximum sentence stating that Ram Rahim sexually assaulted the victims who were under his care. They treated him as a father and worshiped him as a God. It was a case of custodial rape and therefore, was a more grievous offence. The anonymous complaint, which had triggered investigations into the rape allegations in 2002, had alleged that a large number of girls living in the Sirsa Dera of Ram Rahim had been raped by him.

Having considered both the sides, the Judge finally discarded the arguments of the defence counsel and awarded maximum sentence to Ram Rahim. The CBI had registered the case on December 12, 2002, following a directive of the Punjab and Haryana High Court to probe the alleged sexual exploitation of “Sadhvis” at Dera Sacha Sauda in Sirsa by its chief.
After thorough investigation, during which about two dozen suspected victims were examined and statements of two victims and their relatives recorded, the agency filed a charge sheet against Ram Rahim on July 30, 2007. “The charges were framed against the accused on September 6, 2008. During trial, the prosecution examined 15 witnesses. The accused was also examined.

Thereafter, one witness was examined as a court witness on the orders of the Supreme Court. The defence examined 37 witnesses and the final arguments were concluded on August 17 this year,” said the agency. In the wake of large scale violence on August 25 in different parts of Haryana and Punjab, a heavy security arrangement had been made in the Rohtak range to ensure peace.  Over 100 preventive arrests were made by the local police and 10 Deras sealed.

Senior members of Ram Rahim’s Dera Sacha Sauda sect were placed under detention as a precautionary measure. Over the weekend, more than 100 branches of the sect were sanitised and sealed across Haryana. Petrol cans and sticks were found stockpiled. The police in Sirsa, where Ram Rahim’s 1,000-acre main base is located, have been urging his devotees to emerge from the campus. Tens of thousands left Sirsa for their homes in buses since yesterday. The police said thousands still remain and are refusing to leave. The Dera chief’s followers insist the flamboyant Ram Rahim is innocent.