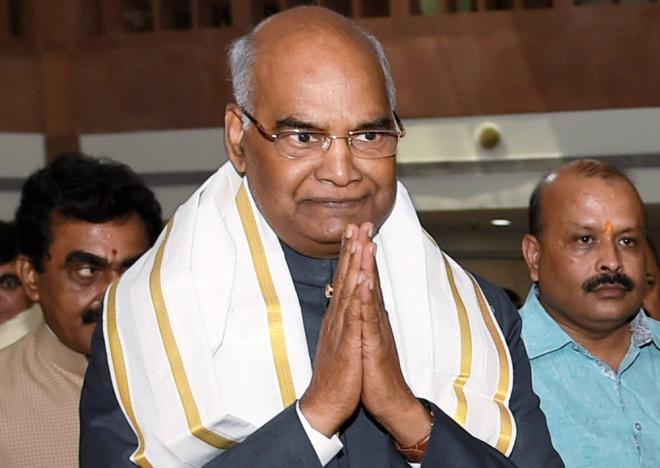 NEW DELHI : The stage is all set for the election of the 14th President of India on Monday in a contest in which National Democratic Alliance (NDA) candidate Ram Nath Kovind has a clear edge in the electoral college over the opposition nominee Meira Kumar. Kovind has a clear edge in the election with support from 63% voters in the electoral college that has a vote value of 10.98 lakh.
The candidature of Kumar, a former Lok Sabha Speaker, has been supported by 16 opposition parties including the Congress, the Trinamool Congress, CPI(M), SP, BSP, DMK, JD(S) among others.Kumar, who has been campaigning across state capitals, has described the presidential contest as a “battle of ideologies”.
In the electoral arithmetic, Kovind has a distinct advantage over his rival, a former Lok Sabha Speaker, with parties like Janata Dal-United (JD-U) and Biju Janata Dal (BJD), who are not allied with BJP, deciding to vote for him. The Janata Dal-United has about 1.91 per cent of electoral college votes, while the BJD of Odisha has 2.99 per cent. In addition, the ruling TRS in Telangana (two per cent), different factions of AIADMK (5.39 per cent), YSR Congress (1.53 per cent) have also announced their backing for Kovind.
“We all have the duty to preserve the importance of the Constitution of India. I would ensure equal justice to all and avoid discrimination based on caste, religion, sect, gender and region,” has been Kovind’s refrain while on the campaign trail.At the all party meeting convened by Parliamentary Affairs Minister Ananth Kumar on Sunday, Prime Minister Narendra Modi urged leaders to reach out to MPs and MLAs of their respective parties to ensure that “not a single vote goes waste.”

The Election Commission has allowed 14 Rajya Sabha members and 41 Lok Sabha members to exercise their franchise at a polling booth of their choice. Uttar Pradesh Chief Minister Yogi Adityanath, his deputy Keshav Prasad Maurya, Goa Chief Minister Manohar Parrikar – all Parliamentarians – and all but three Parliamentarians of the Trinamool Congress will cast their vote in their respective home states – Uttar Pradesh, Goa and West Bengal.
Besides the NDA constituents, who constitute 48% of the electoral college, Kovind has received support from the AIADMK, Telangana Rashtra Samithi, YSR Congress, Biju Janata Dal and the Janata Dal (U). The BJP is also expecting to increase in the vote share due to cross-voting.

Lok Sabha Secretary General Anoop Mishra is the Returning Officer for the election.The value of vote of an MP is 708 while that of an MLA varies from state to state depending on the size of its population. Officials said that each polling station has been given a specified number of ballot papers. While MPs will be given green ballot paper, MLAs will be given one that is pink.

In the last presidential election in 2012, Pranab Mukherjee had defeated P.A. Sangma and got over 69 per cent votes.Officials said that ballot papers have reached the polling stations and requests made by the members of the electoral college about their choice of exercising ballot had been taken into consideration.