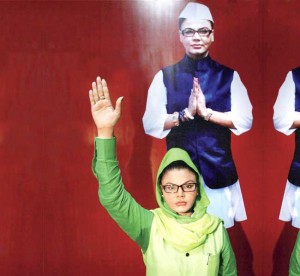 MUMBAI : At first sight, it appears to be a list of contestants for the reality show, ‘Bigg Boss’, rather than a list of candidates for the upcoming Lok Sabha Elections 2014.Several oddballs from B-Town have entered the fray, not only adding a certain colour to the polls, but also providing unlimited entertainment. Politics and Bollywood always make for a heady mix.
Rakhi Sawant loves to spring surprises. The item girl sure did it when she suddenly announced her candidature from the Mumbai North West parliamentary constituency. Standing as an independent candidate with the green chilli as her symbol, she is keen to spice up the political scene.Recall Govinda getting jiggy in ‘Tujhko Mirchi Lagi Toh Mein’ from the 1995 David Dhawan film, ‘Coolie No 1’? Don’t be surprised if Rakhi too breaks into a jig as a fitting reply to her detractors, especially Kamaal R Khan, who will be contesting against her as the Samajwadi Party’s candidate.
On his part, he declares that he doesn’t care about his opposition. “It does not really matter to me if Rakhi Sawant is going to contest from the same constituency. All she will manage is about a 1,000 votes from the 1.7 million voters in the area.”For the Mumbai North West seat, Congress veteran Gurudas Kamat is pitted against Gajanan Kirtikar of the Shiv Sena, besides Aam Aadmi Party’s Mayank Gandhi and Maharashtra Navnirman Sena’s filmmaker-turned-politician Mahesh Manjrekar.
Adding to this mix are Rakhi and Kamaal. The Deshdrohi producer (Kamaal R Khan) has already declared on social media, “Most famous 2 constituencies are #Varanasi n #NorthwestMumbai today n credit goes to Modi Kejriwal KRK Manjrekar n Rakhi. (sic)”While announcing her candidature, Rakhi claimed, “I have been virtually mobbed by people demanding that I should fight the election, so here I am.
I was offered a BJP ticket from Srirampur in West Bengal.
But I am from Mumbai and I know Hindi and Marathi. I don’t know the local language of Bengal, so why should I stand from there?” she said.”My aim is to ensure women’s safety. I don’t want Mumbai to become like Delhi. I want to arrange for self-defence classes for women, so that they can protect themselves,” she stated. The item girl’s detractors say that when she realised that she wouldn’t get a ticket from Mumbai, she decided to go solo.
On Women’s Day, Rakhi had distributed dustbins to vegetable vendors and slumdwellers. On March 9, she claimed she was manhandled when she visited a school at Lokhandwala to check on her name in the electoral list.Rakhi then visited Agra where she met Jain priest Pulak Sagar to seek his blessings. Clearly, she wanted God on her side as she embarked on a new phase in her life.