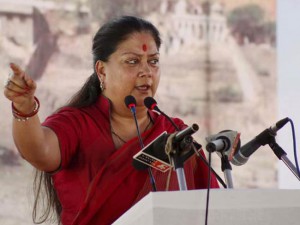 NEW DELHI/JAIPUR: As pressure continued to mount on Rajasthan Chief Minister Vasundhara Raje to quit for helping scam-tainted Lalit Modi, the former boss of the cash-rich Indian Premier League, the BJP leader made it clear that she would do so only if other party leaders accused in the Lalitgate also step down.

Party sources said Raje has told the top leadership that she will step down from the CM’s post if other leaders facing accusations also quit. It may be noted that apart from Raje, External Affairs Minister Sushma Swaraj has also been facing allegations of helping Lalit Modi.
Swaraj has admitted to helping Modi secure travel documents from the UK government last year for visiting Portugal for the treatment of his cancer-stricken wife. Swaraj claimed that she helped Modi on “humanitarian grounds” but Opposition has alleged quid pro quo as her husband and daughter have represented Modi in courts.

Meanwhile, Raje, who is scheduled to visit Delhi on June 27 for a meeting of the Niti Aayog, has not been asked to resign so far, IANS reported BJP sources as saying. According to agency reports, Raje is digging in her heels and has signalled that she would not resign on her own.
The Rajasthan CM has also indicated that she had support of the vast majority of BJP legislators in the state as well as MPs. Also, the BJP leadership has decided to back Raje for now even after she reportedly conveyed to party leaders that she had testified on Lalit Modi’s immigration application document in the UK.
Raje met some party legislators yesterday, while her office accused some TV channels of “constantly running” baseless and false news on her alleged links with Lalit Modi.
The Congress, which had shown a document about Raje testifying in favour of Lalit Modi’s British immigration application in 2011, continued to keep up pressure for her resignation. Bharatiya Janata Party sources said that Saudan Singh, who is organisational in-charge of Rajasthan, and general secretary Arun Singh met Raje in Jaipur on Wednesday after Congress showed the purported document.
According to the sources, the chief minister told the two leaders that document contained her signatures. She is also learnt to have told the two leaders that she had testified in her personal capacity when she was the Leader of the Opposition in the Rajasthan Assembly.

What has seriously embarrassed the BJP is her reported statement that she did not want her support to Lalit Modi to be made known to Indian authorities.
“While the leadership is concerned about image of the party being hit due to Opposition’s pressure, it has to ensure that there are no divisions,” a party functionary told IANS. Another functionary said the BJP leadership has decided to back the chief minister for now.

“Vasundharaji is not going to be asked to resign under any kind of pressure – be it from Congress or from media,” he said. The RSS has also cautioned the BJP leadership against falling into any “media trial trap”, informed sources told
According to them, the RSS is of the view that if Raje is asked to resign, the pressure will mount on the BJP to take a call over Sushma Swaraj. Raje on Thursday met her cabinet colleagues and party legislators and functionaries in Jaipur to gauge her support, state BJP sources said.
More BJP leaders, including legislators, were expected to meet her on Thursday and Friday, the sources added. “It seems the meeting with MLAs and others is a pressure tactic. She wants to tell the BJP leaders that she enjoys the support of the BJP state unit,” a BJP leader told IANS. State Health Minister Rajendra Rathore, who is a known supporter, ruled out her resignation. “The BJP is fully behind the chief minister.
There is no question of her resigning,” he said here. The Congress has, however, taken an aggressive stand against Raje and threatened to launch an agitation if she did not resign, while the Communist Party of India-Marxist and the Aam Aadmi Party have also demanded her immediate resignation.