VARANASI: Days after Narendra Modi took on Rahul Gandhi in Amethi, the Congress vice-president on Saturday retaliated by campaigning on the last day in this temple town, where the BJP’s Prime Ministerial candidate is in the fray.Donning a Gandhi cap, the 43-year-old leader flanked by Congress candidate Ajay Rai began his roadshow in a Muslim-dominated Gol Gadda area, waving to supporters who surrounded his vehicle. 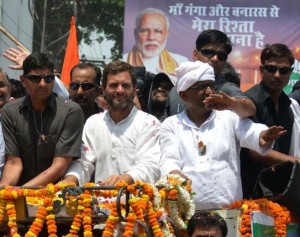 Mr. Rahul’s roadshow follows a massive one conducted by Aam Aadmi Party challenger Arvind Kejriwal on Friday and another one by Mr. Modi the day before.The roadshow is to conclude after about 10 km at Lanka near BHU gate, the same place where Mr. Kejriwal and Mr. Modi had begun their roadshows.In his last push before campaigning ends this evening, Mr. Kejriwal was conducting another roadshow on Saturday, while SP leader and U.P. chief Minister Akhilesh Yadav also had one scheduled.
Leaders present in Mr. Rahul’s roadshow included Ghulam Nabi Azad, Madhusudan Mistry, C.P. Joshi and Raj Babbar.Congress supporters had begun assembling since early in the morning.“We are fighting to win. We are confident of our victory,” said Mr. Azad who has been camping here.Breaking an unwritten code, Mr. Modi had addressed a rally in Amethi, where Mr. Rahul has been challenged by BJP’s Smriti Irani, on the last day of campaigning there on May 5 and had made a stinging attack on the Gandhi family.
The show of strength by Mr. Rahul came as campaign frenzy gripped Varanasi, which will go to polls on May 12, in the last lap of the nine-phase Lok Sabha elections.A large posse of policemen surrounded Mr. Rahul’s convoy as it moved with the flag-waving crowd in the streets of Varanasi.With the sun blazing down, Congress supporters, many of them wearing tricolour caps, shouted slogans.
Mr. Rahul’s roadshow was allowed in Beniya Bagh, where Mr. Modi was refused permission by the Election Commission to hold rally due to security reasons, prompting an angry reaction from BJP.“It is blot on the electoral process where a PM candidate has not been allowed to hold rally in his constituency. Why were security reasons cited for Modi and not for the other leaders who are campaigning there?“It is now clear that the permission was denied due to political reasons and not for security reasons,” BJP leader Arun Jaitley said.