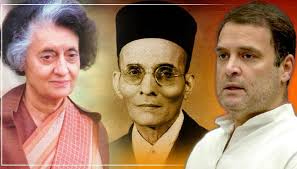 DELHI/MUMBAI : “Rahul Gandhi first ought to study history before making such false and misleading statements about Veer Savarkar. The usage of ‘your obedient servant’ was commonplace at the time when one gentleman wrote to another.
Even Mahatma Gandhi wrote this after his letters. By that measure, I too can say that he was beholden to the British. In fact, in one of his letters to the British authorities, Gandhiji says that no Indian has cooperated with you for 29 years as I have…based on what Rahul Gandhi is saying, does this mean the Mahatma was close to the British?” said Mr. Savarkar, calling the Congress MP’s criticisms of V. D. Savarkar “utterly pointless.”
Congress MP Rahul Gandhi Thursday defended his remarks about VD Savarkar – that ‘he wrote mercy petitions to the British and accepted pension’ and that he did so ‘because of fear’ – and said ‘I am very clear he helped the British’. Addressing a press conference at Wadegaon in Akola district during the party’s ‘Bharat Jodo Yatra’ earlier in the day, Rahul Gandhi accused Savarkar of helping the British and writing mercy petitions to them out of fear.”I will read the last line, which says ‘I beg to remain your most obedient servant’ and is signed V D Savarkar, which shows he helped the British,” Gandhi said at the media interaction during his Bharat Jodo Yatra foot march which is in the last leg in Maharashtra.
“I have a document that comprises Savarkar’s letter to (the) British in which he has stated ‘I beg to remain, sir, your most obedient servant’. This is not written by me… but Savarkarji. Let everyone read this document,” Gandhi said. “I am very clear that he helped the British,” he said, brandishing the letter he said Savarkar wrote to the British; sections of which were highlighted in blue.”Savarkar signed this letter whereas Mahatma Gandhi, pandit Jawaharlal Nehru, Sardar Vallabhbhai Patel were in prison for years… did not write any letter. I believe Savarkarji signed this letter because of fear,” the Congress leader said.
Fadnavis had accused Rahul Gandhi of ‘shamelessly lying… want to know how many Congress leaders went through suffering like Savarkar for 11 years. Despite such prolonged torture, he sang (the) song of freedom,” he said.The former Maharashtra chief minister has, meanwhile, distanced himself from Rahul Gandhi’s remarks. “We do not approve. ” He said earlier today. “We have immense respect and faith for Swatyantra Veer Savarkar and it cannot be erased” Uddhav Thackeray said before Rahul Gandhi’s presser in Buldhana.
Thackeray – who led the Sena (before it split) into an alliance with the Congress and NCP, after squabbles with the BJP over power-sharing in 2019 – has been accused of ditching his father Bal Thackeray’s Hindutva  principles.Meanwhile, BJP spokesperson Sambit Patra on Thursday slammed Congress leader Rahul Gandhi for “insulting” Veer Savarkar during Bharat Jodo Yatra and demanded his apology.
“This is very shameful that Rahul Gandhi did a press conference in Maharashtra and insulted the son of the State and freedom fighter Veer Savarkar. The kind of language Rahul Gandhi used for Veer Savarkar in his Bharat Jodo Yatra is a very indecent and pathetic act. As far as Veer Savarkar is concerned, he is a freedom fighter and is very close to all of us,” Patra told ANI.
Ranjit Savarkar, the grandson of Vinayak Damodar Savarkar, registered a complaint against Congress MP Rahul Gandhi for allegedly “insulting” the Hindutva ideologue at Shivaji Park police station in Mumbai.PTI reported. However. , no FIR has been registered yet. We are conducting further probe,” a police official told PTI.In a complaint lodged Savarkar also demanded that Maharashtra Congress chief Nana Patole should be booked for “making similar statements”.”No FIR has been registered.
( Bureau Report with  Mumbai Inputs).