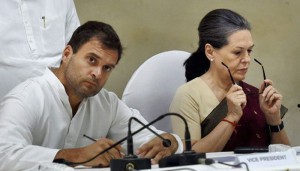 NEW DELHI: Rahul Gandhi’s ‘sabbatical’ seems to have opened a Pandora’s Box in the Congress party. Senior party leaders have now claimed that Rahul, party vice-president, feels he is not being allowed to function independently and that he and party president Sonia Gandhi are not always on same page as far as decision-making is concerned.
Speaking to a news channel, Congress general secretary Digvijay Singh Wednesday claimed that Rahul has a very strong feeling that “vested interests” in the party are preventing him from functioning independently.
While Digvijay, a long-time mentor of Rahul, did not name anybody, he stressed that the Congress scion was “not running away” from responsibilities and that he is “made of sterner stuff”.
Digvijay’s remarks came on a day when alleged photographs of Rahul Gandhi ‘holidaying’ in the hills of Uttarakhand surfaced on social media. The party had earlier said that Rahul was going on two weeks’ leave to reflect upon recent election results and prepare for the upcoming AICC session in April.
Digvijay too expressed surprise over Rahul’s sabbatical from party work, but added that Gandhi had held consultations on the future roadmap of the Congress before going on leave.
The senior Congress leader, however, denied any differences between Sonia Gandhi and Rahul, saying they had a good bonding but they were different in their thinking due to the age gap, a feature which exists in all families.
Senior party leader and former union minister Kamal Nath also defended Rahul Gandhi yesterday, saying that the party vice president had gone on leave to introspect and draw a roadmap for the party.
Speaking to a news channel, Nath said the party needs a new roadmap in view of poll losses and this is what Rahul is trying to do.Advocating “full responsibility” for Rahul, Nath, like Digvijay, acknowledged that the mother-son duo were not always on same page and on some occasions, not aware of each other’s views on a particular issue.
This, he said, has led to situations where decisions taken by the party were neither of Sonia Gandhi nor of Rahul.The reactions came on a day when party sources claimed that Rahul could be elevated as party president at the AICC meet in April.