KOLKATA: Trying to recompensate low campaign investments on behalf of Congress, now locked in a survival battle, especially in West Bengal, party’s unofficial prime ministerial candidate Rahul Gandhi launched a scathing attack on the Trinamool Congress and BJP at a rally in Malda District today.
Taking TMC as major rival of the Congress in all 42 LS seats, he hijacked both Left and state Congress tirades to roll out attacks on TMC, pointing to “surprising fact that despite the state with a lady Chief Minister, in torture on women, the state has reached an all time high while two- and a-half-year rule didn’t see any development, in terms of generating jobs and developments.’’
Incidentally, in his second political rally in the s 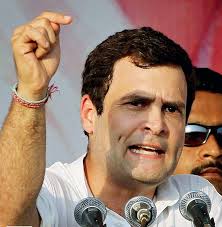 tate, he apparently eyed the district which happens to be one of the a few strongholds of the Congress.He also repeated Left criticism on TMC leaders who allegedly helped the Sardha Chit Fund scam to grow. “The TMC is trying shield its leaders who abetted the crime which left millions  poor,’’ Congress leader said.“As Mamata Banerjee is behaving, like CPI(M) people need to remove the party from the state,’’ he added.
However, not a massive rally, political observers here see a political short cut in his second tour. As to deflect aggressive BJP, he only cited party records on developments triggered by `economic reforms without mentioning the hurtling inflation which hurt the common man most for years now.’While Malda still remains a stronghold of the Congress, like Murshidabad District, observers here feel Congress’ leadership’s low campaign investments  might not leave his party greatly benefited.