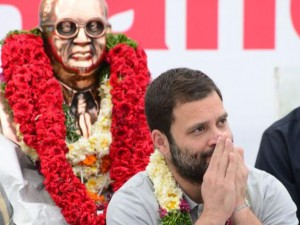 HYDERABAD: Congress Vice President Rahul Gandhi, who had joined student protesters in a mass hunger strike at the Hyderabad Central University, likened Dalit research scholar Rohith Vemula – who committed suicide earlier this month – to Mahatma Gandhi. It is Rohith’s birthday today and also the day Gandhi was assassinated in 1948.
“He (Gandhi) lived his life searching what he called his truth, his understanding of the world. Fought for it all his life. He was killed by the forces that didn’t want to hear what his truth was. The exact thing was done to Rohith,” Rahul Gandhi said.
Rohith’s mother Radhika and brother, Raju, also joined the students in their hunger strike in protest against the death of the research scholar, who hung himself days after he and four other Dalit students were suspended by the university.
“I am here today at the request of Rohith’s friends and family to stand with them in their fight for justice,” Mr Gandhi tweeted. He was on the campus since midnight on Saturday and sat through till the hunger strike ended this evening.
Mr Gandhi arrived last night after a protest march and candle light vigil. He had met Rohith’s family and spent the night at the university.
The BJP has criticised Mr Gandhi’s visit, his second to the campus to protest against Rohith’s death. The ABVP, a student body with close links to the BJP, has called a strike in Telangana colleges in protest against Mr Gandhi’s visit.
“Rahul Gandhi and Congress are so politically bankrupt and unemployed that he has to politicise tragic death of a student repeatedly,” alleged Telangana BJP spokesperson Krishna Saagar Rao.
Hours before Mr Gandhi’s visit, the university changed its interim Vice-Chancellor. Vipin Srivastava, who had taken over on Monday, has gone on leave and M Periasamy, the senior-most professor after him, will take charge.
Prof Srivastava had taken interim charge after Vice-Chancellor Professor P Appa Rao, named in a police complaint in Rohith Vemula’s death, went on an indefinite leave. Mr Srivastava’s appointment had triggered fresh protests; he had headed the panel that punished Rohith and the four other students for allegedly beating an activist of a rival student union in August.
The university has revoked the suspension of Rohith’s companions, but the protesters have rejected it, demanding that Prof Appa Rao and Union Ministers Bandaru Dattatreya and Minister Smriti Irani be sacked.The protesters and opposition parties accuse the ministers of pressuring the university to punish Rohith and the other students.