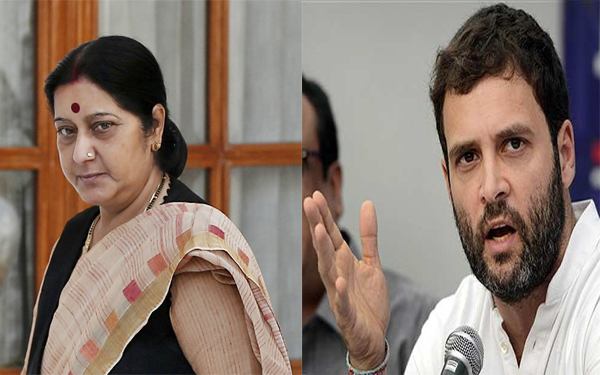 The jibe was directed at the BJP and its leaders who have lost no opportunity to criticise what they call “60 years of Congress governance”. His reference was to Ms Swaraj’s comment that since Independence, India had focussed on nation-building, whereas Pakistan had concentrated only on exporting terror.

Mr Gandhi’s comment comes days after his speech at New York’s Times Square, in which he attacked the BJP and Prime Minister Narendra Modi and spoke of “divisive politics” that was “ruining India’s reputation of peace and harmony abroad”. The remarks had drawn sharp responses from the BJP, which said his attack on the PM on foreign soil was “deplorable”.

Sushma Swaraj had in her speech at the world body, cited IIMs and IITs among India’s achievements after Independence, whereas Pakistan had only succeeded on creating terror.

“I would like today to tell Pakistan’s politicians just this much, that perhaps the wisest thing they could do is to look within. India and Pakistan became free within hours of each other. Why is it that today India is a recognised IT superpower in the world, and Pakistan is recognised only as the pre-eminent export factory for terror?” Swaraj asked.
“We produced scientists, scholars, doctors, engineers. We created IITs, IIMs and AIIMS. What have you (Pakistan) produced? You have produced terrorists… you have created terrorist camps, you have created Lashkar-e- Taiba, Jaish-e-Mohammed, Hizbul Mujahideen and Haqqani network,” she said in the 21-minute speech that named Pakistan twice and took on its president Shahid Khaqan Abbasi.
Swaraj had also referred to previous governments’ contribution to India’s development. “There have been many governments under many parties during 70 years of Indian freedom, for we have been a sustained democracy. Every government has done its bit for India’s development,” she said, highlighting India’s achievements in the fields of education, health, space etc.

Her speech was praised by PM Narendra Modi and Union Home Minister Rajnath Singh. In a series of tweets, Modi said, “A strong message was given by Sushma Swaraj ji on the dangers of terrorism and why we have to unite and fight this menace.” “Incredible speech by EAM (External Affairs Minister) Sushma Swaraj at the UN! She has made India extremely proud at the world stage,” he said.(With Agency Inputs ).