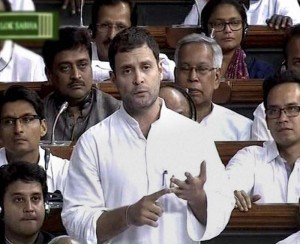 NEW DELHI: Congress today accused Prime Minister Narendra Modi of not fulfilling promises including bringing black money and providing employment to youth. Participating in motion of thanks on President’s address to joint sitting of Parliament, party leader Rahul Gandhi alleged in the Lok Sabha that Mr. Modi is siding with people involved in generating black money.
He also charged the Prime Minister with not paying heed to any body while taking decisions. Mr. Gandhi alleged that Prime Minister does not listen to anybody and even Home Minister Rajnath Singh was not aware of the Naga peace accord. Referring to recent JNU row, Mr. Gandhi questioned why Mr. Modi is silent over the violence in Patiala House Court ahead of hearing of bail petition of JNU student Union President.
He also criticized government’s foreign policy with regard to Pakistan and taunted Prime Minister’s unscheduled visit to Lahore saying it destroyed six years of UPA work to pressurize the Islamabad to take action on 26/11 Mumbai terror attack

Reacting to Rahul Gandhi’s speech in Lok Sabha, Home Minister Rajnath Singh refuted the allegations leveled by Congress Vice President that he was not aware of Naga peace accord which was signed last year.
Talking to reporters in New Delhi this evening, Mr. Singh said Congress leader’s statement in the Lok Sabha is completely false and baseless. He said he had several rounds of consultations with Prime Minister Narendra Modi on the peace process.
The Minister accused Rahul Gandhi of misleading the House. In August last year, a historic peace accord was signed between the Centre and Nationalist Socialist Council of Nagaland.
Participating in the debate in Parliament, BJP MP Prahlad Joshi targeted the Congress saying those who are now speaking against corruption were neck deep in scams. He said, it was during the UPA rule when big scams of 2G spectrum, Coal block allocation and CWG scam took place.
SP leader Mulayam Singh Yadav said, the government should focus on fulfilling the promises it had made to the people. He said, he would like the Prime Minister to tell the nation how much black money have been brought back home. Mohd.Salim of CPI(M) also raised the issue of unemployment accusing the government of failing to act on this front. The discussion continued till late evening.