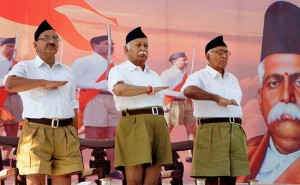 PATNA: RJD chief Lalu Prasad has credited his wife and former chief minister Rabri Devi for the change in RSS’ dress code from khaki shorts to trousers.
“Rabri Devi has forced Rashtriya Swayamsewak Sangh to change its dress code,” the Rashtriya Janata Dal chief said in a tweet.Taking a dig at the RSS, Lalu Prasad said on Sunday that “we will again make them return in half pants”.
The RJD leader said that his wife had questioned the RSS’ dress code nearly two months ago, after which the RSS was embarrassed to such an extent that it decided to replace the shorts with trousers.

In January, Rabri Devi had said: “Aren’t the RSS oldies ashamed to wear half pants in public?”Her statement was then criticised by several top leaders of the Bharatiya Janata Party, including some union ministers.
Last month, senior BJP leader and former Bihar deputy chief minister Sushil Kumar Modi ridiculed Rabri Devi, saying “she is a woman with a mindset of the 19th century”.The RSS on Sunday said its members will now do away with the traditional khaki shorts and opt for a pair of trousers instead.
“We have taken the decision to change the dress code for Swayamsevaks. We have decided to replace the khaki shorts with brown pants,” RSS general secretary Bhaiyyaji Joshi told the media in Nagaur in Rajasthan.