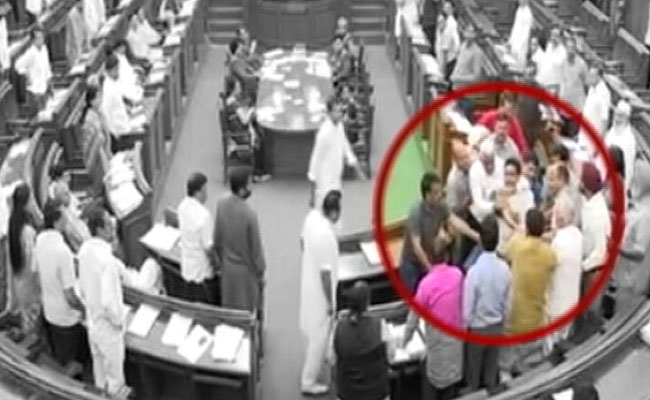 NEW DELHI : Suspended Aam Aadmi Party (AAP) leader Kapil Mishra was manhandled and pushed by AAP lawmakers inside the Delhi Assembly as it met for a one-day special sitting on the GST or Goods and Services Tax.
In visuals from the assembly, Mr Mishra was seen struggling as he was grabbed and restrained by a group of lawmakers and marshals. One lawmaker even had him in what appeared to be a stranglehold. He was finally dragged out by marshals.Claiming that he was kicked and punched by “five or seven” AAP legislators, Mr Mishra said “the cameras were switched off at that time”.

The incident took place after Mr Mishra incessantly demanded a chance to speak in the house. Speaker Ram Niwas Goel was seen ordering Mr Mishra to leave the house, and when the scuffle broke out, he directed marshals to escort him out. “No maar-peet (beating) is happening here,” Mr Goel said repeatedly.
Outside, Mr Mishra claimed he had been injured in one arm and alleged, “This is the first time that a legislator has been assaulted by legislators inside the assembly.”Sacked as a Delhi minister earlier this month, Mr Mishra has relentlessly targeted Chief Minister Arvind Kejriwal, whom he has accused of corruption.
He says he had urged the Speaker to let him speak on the subject in the house and had also called for a special assembly sitting at the Ram Lila grounds, a popular rally site in the heart of Delhi.”I had written a letter to the Speaker on Mr Kejriwal’s corruption and had asked to be allowed to speak. …but I was attacked,” Mr Mishra said.
The BJP said the incident exposed AAP as a frustrated group. “This is how they deal with people who try to raise their voice,” said the party’s Shahnawaz Hussain.(zeenews).