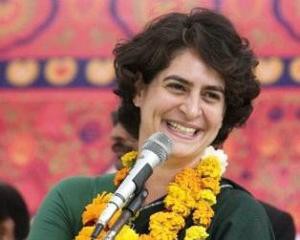 NEW DELHI: Vadra, the daughter of Congress president Sonia Gandhi, proved herself to be a good bargainer 14 years ago.According to a report in a local Daily , Priyanka Gandhi, the wife of businessman Robert Vadra, managed to convince the Vajpayee government to reduce the monthly rent to her 2,765.18 sqm house in Lutyens’ Delhi from Rs 53,421 to only Rs 8,888. The government has provided her the accommodation as she is an SPG protectee.
On May 07, 2002, Priyanka wrote to the government and said that Rs 53,421 was “too high” an amount and “beyond her paying capacity”, reports the daily.Currently, the sister of Congress vice president Rahul Gandhi pays Rs 31,300 for accommodation in Type VI government house at 35, Lodhi Estate.
Robert Vadra not averse to joining politics, says didn`t need Priyanka Gandhi to enhance his lifeNot only Priyanka but also former Punjab DGP KPS Gill, All India Anti-Terrorist Front chief MS Bitta and Punjab Kesari editor Ashwani Kumar were provided accommodation on security grounds. Kumar evacuated his house in 2012, while Gill and Bitta are believed to be paying around the same amount as Priyanka.

In 2002, Priyanka told the government that she had been “occupying the bungalow on the request of the SPG and that a large part of the bungalow was occupied by SPG itself” and not by her family.
She added that it is not her choice to stay in a general pool house but she is doing so due to security considerations. Notably, 35, Lodhi Estate was allotted to Priyanka, who is a private citizen, on the recommendations of the SPG, cabinet secretariat and the Home Ministry on February 21, 1997, on payment of market rent of Rs 19,900 per month. The rent has since been revised periodically.

In 2002, she wrote to the government requesting that she may “continue to pay rent at the earlier rate of Rs 28,451 per month, instead of the increased rate of Rs 53,421 per month”, as per file notings from the Ministry of Urban Development’s directorate of estates – accessed under RTI by Noida resident Dev Ashish Bhattacharya.

Similar concerns were raised by other “private citizens” also.UP Congress leaders want Priyanka Gandhi to lead party in the state, perform yagna
The note for the Cabinet Committee on Accommodation on July 8, 2003 said that “the matter has been reviewed keeping in view the facts that security protectees are not unauthorised occupants and allotments have been made to them as per policy of the government.
It has been felt that the security protectees, including SPG protectees, may be charged special licence fee in respect of the government accommodation provided to them as they are private persons and they cannot afford to pay the market rates of licence fees”.