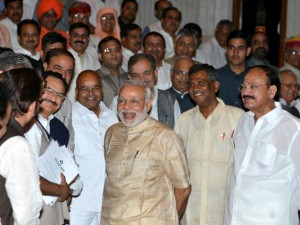 NEW DELHI: Prime Minister Narendra Modi on Sunday attacked the opposition for trying to project the government as anti-poor on the issue of the Land Acquisition Bill and said that some people had decided not to speak, see or hear anything good about the NDA government.
On a day that the Congress organised a farmers rally here against the Land Bill, Mr. Modi said lies were been spread on the Bill by “perverted minds”, clearly indicating that the government was not going to withdraw the proposed legislation.
“Don’t measure us on the scale of raj-niti (politics) but on rashtra-niti (nationalism),” the Prime Minister said while outlaying the government’s poverty alleviation programmes during the inaugural session of a day-long workshop for the BJP Parliamentary Party.
“Our path is clear: we are working in the direction of fulfilling the hopes and aspirations of the poor,” he said.Expressing the confidence that the second part of the Budget session of Parliament beginning Monday will be productive, the Prime Minister asked party MPs to come out of being in “opposition mould” and go into the session “holding their head high” for the pro-poor measures taken by the government since it came to power last May.

Mr. Modi seized the occasion to lament that that some of the media was so taken up by being critical of his government that its achievements such as the recent evacuation of Indians from strife-torn Yemen and getting uranium supply from Canada and nuclear reactor technology from France during his recent visit to these countries, were underplayed.
Hailing Union Minister of State General V.K. Singh for the successful operation in Yemen he said he “salutes” him. He also lauded External Affairs Minister Sushma Swaraj for her quick responses to distress calls and said the two ministers should be felicitated.
Stressing on the “Beti Bachao, Beti Padao” campaign, Mr. Modi observed that unless Muslim, Dalit, Adivasi, Backward community girls were educated the country will not progress. Unlike before, the government had universalised its programmes for housing, pension and Jan Dhan Yojna, he said.
He said that since his call, about four lakh affluent people had given up LPG gas subsidy. The government now plans to use the Rs. 200 crore saving that had accrued for replacing fuel burners in villages.

Taking a dig at the Congress, he said it was alright [for Rajiv Gandhi] to say that of Re 1 given for central schemes, only 15 paise reached people in villages and asked: but where was the solution?

He urged BJP MPs to ensure that the Mahatma Gandhi National Rural Employment Guarantee scheme was utilised properly in villages to create assets and money reached the poor so that the rural purchasing power goes up.
Asserting that India was being looked at internationally as the fastest growing economy, he spelt out figures to show that inflation including food prices, had gone down in the last one year and growth was up.
As he was leaving, Mr. Modi walked into a group of journalists and exchanged pleasantries ,but declined to take any questions.Earlier, Parliamentary Affairs Minister M. Venkaiah Naidu said the Land Bill was a “progressive” piece of legislation aimed to make India “strong”.
Mocking the Congress slogan of “zameen vapasi” (return of land), he said indeed the party should return to farmers the acres of land it acquired in Haryana and elsewhere under the UPA. “We have not acquired any land.”