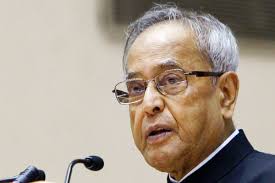 UCKNOW: : President Pranab Mukherjee expressed his concerned for rising number of pending case in High Courts of the Country. Speaking on the occasion of sesquicentennial celebration of Allahabad High court today, President underlined that shortage of judges in courts, and said that more than 38 lakh cases are still pending in theses courts. Addressing a large gathering of judges of Supreme Court and Chief Justice and judges of various High Courts, President Paranb Mukherjee advocated for time bound disposal of cases and said that delayed justice is also like “denial of justice”.
He said justice should be a “living reality”. President also emphasized for up-gradation of judicial infrastructure and modernization of courts and said this would also help in speedy disposal of cases and litigants will also get benefited.
Mr. Mukherjee also underlined role of Information technology in court working and appealed to judiciary to move forward in the direction of E-Courts.
He hoped that with the help of Information Technology court would be connected with National Judicial Data Grid in future. He said unnecessary postponement of cases should be avoided and informed the august gathering that government is also working on National Litigation Policy to avoid unnecessary litigation.

Speaking on this occasion Chief Justice of India T.S Thakur highlighted the challenges of Judiciary and said these challenges are from both outside and within. He said today judiciary is facing crisis of credibility and it is the time to see challenges within.

Addressing the august gathering Union Law Minister D.V.Sadanand Gowda said that success of democracy also depends on strong and impartial judicial system. State governor Ram Naik referred the land mark judgments of Allahabad High court in past and said the judgment of this court has left their impact not only in the state but across the country .
Participating in today event chief minister Akhilesh Yadav reiterated his government commitment to provide all support for the improvement of infrastructure high court and lower courts in the state. He also underlined the need for judicial work should be conducted in public language.
On this occasion several Supreme Court judges, Chief justice of various High Courts, Judges of various other courts, West Bengal Governor Keshri Nath Tripathi, Former Union Law Minister Shanti Bhushan were also present.
The Reserve Bank also released a 10 rupees coin to mark the occasion. Indian Postal department also released special postage stamp. Chief Justice T S Thakur presented a set of coins and postage stamps to the President.
A souvenir and a book on “Judicial review” were also released during the programme. A short documentary “Nyaya Yatra” which depicted the journey of Allahabad High court was also screened for the gathering.
According to reports, President Pranab Mukherjee expressed his deep concerned for large number of pending cases in the courts. Addressing on the occasion of 150th anniversary of Allahabad High Court today, president said judiciary is facing shortage of judges and at the same time more than 38lakh cases are pending in all the high courts.
He also mentioned popular phrase “Justice delayed is justice denied”. Mr. Mukherjee emphasized for the use of information technology in courts and hoped that one day court will work with the National Judicial Data Grid.
Speaking on the occasion Chief Justice of India T S Thakur has drawn attention towards various challenges in the judicial system and said Judiciary is facing crisis of credibility today .
Justice Thakur said we have took look into the challenges within. Addressing the Judges and lawyers Union Law Minister Sadananda Gowda said that success of democracy also depends on strong and impartial judiciary.
Governor Ram Naik mentioned land mark judgments of Allahabad High court. And said that theses judgments have made impact throughout the country. Chief Minister Akhilesh Yadav emphasized that the court should work in common language.