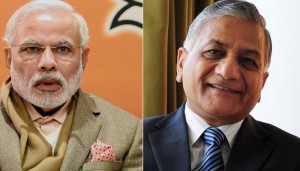 NEW DELHI: Prime Minister Narendra Modi was all praise for Gen (retd) VK Singh, who has faced attack from a section of the media over his “presstitutes” remark, as he hit out at the media for not highlighting the “good works” of his government.
“I salute Gen (retd) VK Singh,” Modi said as he hailed the “unprecedented” rescue mission led by the minister for evacuating Indians out of Yemen, for which External Affairs Minister Sushma Swaraj, too, came in for praise from the Prime Minister.
Modi was critical of the media for ignoring Singh’s work at a time when newspapers worldwide highlighted the Indian rescue mission.He said that the Indian media took note of it, but due to other reasons — a reference to the criticism of Singh, the Minister of State for External Affairs, for his use of the term “presstitutes”.
“Can you imagine? Bombardment is going on in Yemen 24 hours and everybody is out to kill each other and we, after talking to so many countries, manage to stop this for two hours to evacuate as many Indians as possible. It is not a small incident.
“I believe this is the first time in the world that a government minister has stood on the battlefield like a soldier to do this work… I salute General VK Singh,” he said at a meeting of BJP MPs here.

Taking a dig at Indian media, Modi said, “Look at TV channels and newspapers the world over, they are talking about how India has conducted the operation from the forefront. Indian newspapers spoke about it in the end and that too due to some other reason.”
Modi also lauded Swaraj, saying that the External AffairsMinistry had never before worked like it was doing under her.”If somebody (in distress) tweets to her at 1 am in night, she replies by 1.10 am. The embassy concerned is alerted… Has anybody ever seen India’s External Affairs Ministry work like this?” he asked.
Lamenting the lack of what he described was an “echo- effect” of the good works of his government, he said that if BJP was “naturally attached to power” then the party would have organised a grand show to felicitate Singh and Swaraj.
“I will request it now,” he said, adding, “Thousands of people who have come back safe will always have respect for you. Whether media shows your photographs or not, you have made your place in people’s hearts.”
Thanking Modi for his praise, Singh said in a tweet, “Thank you @narendramodi ji for the kind words of appreciation, none of this would have been possible without your able leadership and guidance.”
Using the opportunity to drive home his government’s pro- poor credentials, Modi said that most of those evacuated by it in foreign countries were poor people who had gone there in search of better livelihoods.