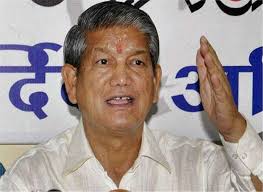 NEW DELHI: President’s rule has been imposed in Uttarakhand and state Assembly has been kept in suspended animation. The recommendation for central rule was made by the Union Cabinet at its emergency meeting last night, chaired by PM Narendra Modi who cut short his visit to Assam.
Earlier, Harish Rawat led Uttarakhand government has been asked to prove its majority by March 28, after nine rebel MLAs of the Congress sided with the Opposition BJP to destabilise the government.
The chief minister maintained that he was ready to prove his majority in the Assembly after the BJP asserted that it had the support of rebel Congress MLAs and should be invited to form government as the incumbent Congress dispensation had been reduced to a minority.
Assembly speaker Govind Singh Kunjwal,has also disqualified nine rebel Congress MLA’s from the House.However, the state Assembly has been kept in suspended animation.Yesterday, Prime Minister Narendra Modi had convened an emergency Cabinet meeting to discuss Uttarakhand crisis.
The Cabinet had considered several reports received from Governor KK Paul, who had described the political situation as volatile and expressed apprehensions over possible pandemonium during the scheduled trial of strength in the state Assembly tomorrow.

Union Finance Minister Arun Jaitley is believed to have briefed the President late last night explaining the rationale for the Cabinet’s recommendation.Arun Jaitlety defends President’s rule in Uttarakhand, says state govt was non-constitutional.
President Pranab Mukherjee signed the proclamation under Article 356 of the Constitution this morning, According sources as saying.The dismissal of the Rawat government now renders tomorrow’s confidence vote infructuous.
Addressing the press in the national capital, Jaitley said, “Harish Rawat’s government was unconstitutional and immoral. It was demand of time that it should have been dismissed. Rawat had lost majority on March 18 when “failed” Appropriation Bill was shown as passed.”
The Appropriation Bill empowers the government to draw funds for expenses from April one and if it is defeated on the floor of the House, the government has to resign. “There can be no better example of implementation of Article 356 (imposition of President’s Rule),” he said.
While referring to March 18, he said in the 71-member Assembly, 67 members, excluding the Speaker, were present out of whom 35 wanted Division of Votes on the Appropriation Bill.
The Division of Votes was sought in writing in advance by the 35 members who also voted against the Bill, despite which the Speaker showed the legislation as passed, Jaitley said.
“The Speaker said in writing that ‘the Division was sought but I treat the bill as passed’. This is for the first time in the history of Independent India that a bill is shown as passed even when it has been defeated. That was the first violation of the Constitution,” said the FM.
Among other reasons cited for dismissing the Rawat government were attempts to “change the composition of the Assembly”, “allurements” allegedly offered by the Chief Minister and long time given to him to prove his majority.
On the other hand, reacting to the developments, Uttarakhand Chief Minister Harish Rawat ​said, “This is murder of our democracy and the Constitution,” as per ANI.
Addressing the press, Rawat said, “Centre refused to give funds to Uttarakhand government, not even for Kedarnath temple of Kumbh mela in Haridwar. The Governor was threatened publicly in a press conference in Delhi.”
“Most upsetting was that I had to make compromise with such a leader (Harak Singh Rawat) who used to value money above everything. The fact that we decided to bring legislation to seize unnamed properties only stimulated the process. Harak Singh ji came to me twice and asked me not to bring legislation to seize unnamed properties,” he added.
“A money deal was constructed, some people say in Rs 1000 crore, some say in Rs 500 crore. We will meet the Governor tomorrow. We will take support to all legal options we have before us. This will be decided by our advocates. In fact I was heading a very delicate majority, if Congress comes back to power, will increase Vidhan Sabha seats from 70 to 90,” he further said.
At the same time, Uttarakhand Assembly Speaker disqualified nine rebel Congress MLAs from Assembly and informed Election Commission of India regarding the decision.In a related development, the rebel Congress MLAs had alleged yesterday that they were offered bribe by Rawat for support during the floor test in the Assembly and had released a video of a “sting” operation purportedly showing the CM, who called it “fake”.
Releasing the alleged ‘sting video’ in Delhi, former Uttarakhand Chief Minister Vijay Bahuguna, who is leading the rebel MLAs, had said, “The very content of that CD proves that you (Rawat) are using undue influence and bribe to attract the nine MLAs. He should resign on moral grounds.”