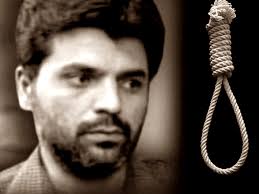 NEW DELHI:The Supreme Court on Wednesday dismissed Yakub Abdul Razak Memon’s plea against his scheduled execution on Thursday in 1993 Mumbai blasts case.
Supreme Court said that there is no lapse in the death warrant issued by TADA court against Yakub Memon. Issue of death warrant is in order.”The court further added, “After the rejection of mercy petition by the President, Memon had not challenged that in the court of law. The dismissal of Memon’s curative petition by three senior most judges of the apex court was correct.”
However, the Supreme Court said it was not inclined to go into the issue of second mercy plea made by Yakub to the Maharashtra Governor.Earlier, the Supreme Court held that Yakub Memon’s Curative Petition was rightly disposed off.
Speaking to the news channel, Senior lawyer Ujjwal Nikam said, “Supreme Court has today rejected petition (curative) filed by Yakub and dismissed all the contentions raised by him.”
Earlier in the day, Yakub Memon, the sole death row convict in the 1993 Mumbai serial blasts case, had filed fresh mercy plea with the President on Wednesday.In a late night development on Wednesday, President Pranab Mukherjee rejected Yakub Memon’s mercy plea.
President Mukherjee was in a long meeting with Union Home Minister Rajnath Singh after which the news of his rejection of Memon’s mercy plea was announced.
According to reports, Yakub Memon has moved the Supreme Court once again on Wednesday night. His lawyers in the petition have said that President Pranab Mukherjee should not take a decision on the mercy plea overnight. The petition urges the President to take time to make a decision on the mercy plea.
Reports also suggest that if the latest petition by Memon is accepted, the judge will hear his petition at his residence. Union Home Minister Rajnath Singh is currently in a meeting with President Pranab Mukherjee to discuss the mercy plea filed by 1993 Bombay blasts accused Yakub Memon.
Singh’s meeting came after government at the top level considered the mercy petition referred to it by the President who acts on the aide and advice of the Council of Ministers.
Prime Minister Narendra Modi, Singh and top officials, including Home Secretary L C Goyal at the Prime Minister’s residence and discussed the issue and felt that the President should be advised to reject the mercy petition.
Hectic consultations were in the evening on the issue with Law Secretary P K Malhotra holding discussions with the Home Secretary apparently on the issue.Rashtrapati Bhavan is expected to make public its decision, one way or the other, on the issue tonight as time is running out for Memon.
Additional Director General of Police (prisons) Meera Borwankar arrived from Pune to oversee the preparations. She is being assisted by deputy inspector general of prisons Rajendra Dhamne and jail superintendent Yogesh Desai.
Desai had overseen the hanging of Pakistani terrorist Ajmal Kasab at Yerwada jail in Pune during his stint there. Commissioner of Police S P Yadav, Joint Commissioner of Police Rajwardhan and zonal deputy commissioner Ishu Sindhu visited the jail on Tuesday evening.
According to the jail manual, Memon will be woken up early in the morning, allowed to take a bath and offered some light refreshment. He would be given religious books to read or recite prayers. A team of doctors will examine Memon before the hanging.
Chief Judicial Magistrate M M Deshpande is likely to be present and she will be reading out the operative part of the trial court’s order to Memon.
Memon had not yet seen the ‘Fansi Yard’, where the hanging would take place. The hangman is supposed to pull the lever after a signal from the magistrate. The body should be kept hanging for half an hour, the manual says. The doctor will then check the body and declare him dead, and an autopsy would be conducted in the jail itself.