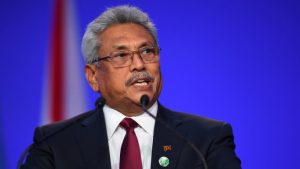 SRILANKA: Sri Lanka’s President Gotabaya Rajapaksa has fled Sri Lanka on Saturday. As per the media reports, protesters demanding the leader’s resignation stormed the compound of his residence. Thousands of protesters broke through police barricades in Colombo and stormed the president’s official residence today, the latest expression of public anger in the nation of 22 million people battling an unprecedented economic crisis. After breaking the barricades and clashing with the police in one of the largest marches against the government in the crisis-hit country this year.

Sri Lanka, the country 22 million people is struggling under a severe crisis that has limited essential imports of fuel, food and medicine, plunging it into the worst financial turmoil in seven decades.  Thousands of protesters broke through police barricades in Colombo and stormed the president’s official residence today, the latest expression of public anger in the nation of 22 million people battling an unprecedented economic crisis.
Thousands of protesters in Sri Lanka stormed President’s house in capital Colombo after breaking the barricades and clashing with the police in one of the largest marches against the government in the crisis-hit country this year.
The video, viral on social media, showed thousands marching towards the Presidential palace chanting slogans against President Gotabaya Rajapaksa, surrounding his official residence, breaking the barricades before storming into it. While the anti- government protests in Sri Lanka demanding President Gotabaya Rajapaksa’s resignation over the government’s handling of the economic crisis have been going on since the beginning of this year, the protests have recently turned violent.
The discontent among the citizens of Sri Lanka worsened when the cash-strapped country stopped receiving fuel shipments, forcing school closures and rationing of petrol and diesel for essential services, plunging it into the worst economic crisis since independence in 1948. Many blame the country’s decline on President Gotabaya Rajapaksa and have demanded his resignation.
A Facebook livestream from inside the President’s house showed hundreds of protesters, some draped in flags, packing into rooms and corridors, shouting slogan’s against Gotabaya Rajapaksa.
According to a TV report Gotabaya Rajapaksa was moved to the Army headquarters last night following intelligence reports that the situation at Saturday’s planned rally “would go out of control”, a top government source told NDTV. On Friday, three judges refused police requests to outlaw Saturday’s protests.
Thousands of protesters — many of whom packed into buses, trains and trucks from several parts of the country to reach Colombo — surrounded the president’s official residence this morning after breaking barricades set up by the police. Several military personnel have also joined citizens as they demand the resignation of President Rajapaksa. The police fired shots in the air but were unable to stop the angry crowd from surrounding the 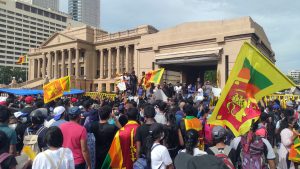 building, a witness was quoted as saying by news agency AFP.

“We have told Gota over and over again to go home but he is still clinging onto power. We will not stop until he listens to us,” said Sampath Perera, a 37-year-old fisherman who took an overcrowded bus from the seaside town of Negombo 45 km of Colombo, to join the protest. The protesters even forced railway authorities to operate trains to take them to Colombo for Saturday’s rally, officials said.
“The curfew was not a deterrent, in fact it encouraged more people to get on the streets in defiance,” a top defense official was quoted as saying by news agency AFP.  “In my entire life I have never seen the country United like this with one goal to throw out a failed Leader. The writing is now on YOUR official house WALL. Please go in peace,” Sanath Jayasuriya, a former cricketer, tweeted with #GoHomeGota.Sixteen MPs from Sri Lanka Podujana Peramuna (SLPP) have requested the president to resign immediately.
Prime Minister Ranil Wickremesinghe, who would assume the presidency in the event of Mr Rajapaksa’s resignation, has called an urgent cabinet meeting to discuss a “swift resolution” to the political crisis, his office said. Sri Lanka is facing severe foreign exchange shortage that has limited supplies of fuel, food and medicine, plunging it into the worst financial turmoil in seven decades. The country has sought a $3 billion bailout from the International Monetary Fund to ease the dollar drought.
(With Agency Inputs  & Media Reports).