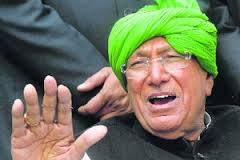 NEW DELHI : Former Haryana chief minister Om Prakash Chautala, 79, today surrendered at Tihar Jail, after the Delhi High Court cancelled his bail and ordered him to discontinue his political rallies.
He was convicted in January last year for running a graft-laden scheme to recruit teachers for government institutions when he was in office in 1999. Mr Chautala, the chief of the Indian National Lok Dal or INLD, was sentenced to 10 years in jail.
Mr Chautala, who was granted bail on medical grounds in May last year, had been actively holding rallies to campaign for the assembly elections in Haryana on October 15.
The Central Bureau of Investigation (CBI) had sought cancellation of his bail and urged the court to bring forward his surrender date, which was earlier fixed for October 17.On Friday, the Delhi High Court had asked jail authorities to take Mr Chautala to the All India Institute of Medical Sciences or AIIMS after his surrender today, if they considered it necessary.
Mr Chautala was first granted interim bail on May 21, 2013, and had been getting extension of bail on the ground that he was admitted in the intensive care unit of Medanta Hospital in Gurgaon due to poor health. The hospital, however, discharged him recently; since then, Mr Chautala had been campaigning.
“If he is well enough to travel, well enough to address rallies, then he is well enough to surrender,” the court had said.
Chautala on Saturday accused the Bharatiya Janata Party (BJP) of pressurising the CBI to frame him for violating bail conditions on purpose.
“I haven`t received any instructions from the court saying I can`t participate in public meetings, and this is a product of BJP`s frustration. The BJP is pressurising the CBI and is trying to frame me on purpose,” Chautala told a news agency.
“The court has asked me to surrender on October 17 and if it asks me to surrender today, I`ll do it. I do not understand why the CBI is interfering as I have done no wrong. Nonetheless, the BJP is about to lose in Haryana Assembly Elections,” he added.
Notably, Chautala is supposed to surrender to Tihar Jail authorities today on the direction of the Delhi High Court.