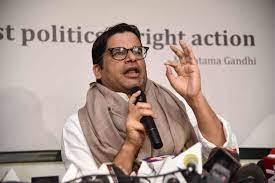 NEW DELHI:  In another addition to the war of words in the politics of Bihar, poll strategist Prashant Kishor on Thursday hit back at Chief Minister Nitish Kumar for suggesting that the former desires to join hands with the Bharatiya Janata Party (BJP). Following JD(U) supremo’s allegations, Kishor in an obvious poke, shared four old and nostalgic pictures of Nitish Kumar greeting Prime Minister Narendra Modi on Twitter. However, the post was deleted within a few of minutes of posting it.
Kishore on Thursday took a jibe at Bihar Chief Minister and Janata Dal United chief Nitish Kumar who called the former a publicity expert and said that he might be wanting to help the Bharatiya Janata Party. Following Kumar’s statement, the former JDU member tweeted four photos of Kumar with Prime Minister Narendra Modi in an apparent dig at the earlier alliance between the two parties.
Sharing photos featuring Nitish Kumar and PM Modi with no caption, Kishor clearly pointed toward Nitish Kumar’s recent switch to the Mahagathbandhan alliance to remain in power. Notably, in all the pictures shared the JD(U) leader was seen greeting the Prime Minister with folded hands.
Meanwhile, The Bihar CM while addressing a press conference in the national capital was replying to a question about Prashant Kishore who had joined the JDU but was later ousted from the party. Without naming the poll strategist, Kumar said that his statements have no meaning and asked if he knows what has been done in the state since 2005.
Mr Kumar scoffed at PK’s assessment while talking to reporters in Delhi after a series of meetings with leaders like Rahul Gandhi, Arvind Kejriwal and Sharad Pawar amid buzz about him emerging as the opposition’s prime ministerial candidate.” That man (PK) came with me and then I told him to quit this work and come with me. But he didn’t listen to me and throughout the country kept working for so many parties… it is his business (dhandha),” Mr Kumar told reporters. 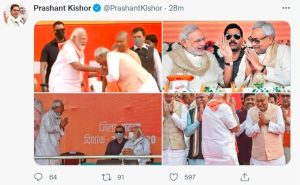 Election strategist Prashant Kishor, reacting to former mentor Nitish Kumar’s dig that he wanted to be with the BJP, today posted his response with a set of photos, without comment. A tweet, now deleted, featured four photos in which Nitish Kumar is seen smiling with Prime Minister Narendra Modi.
The latest bout between Nitish Kumar and his one-time party number two was triggered by Prashant Kishor’s taunts after the Bihar Chief Minister swapped allies recently, dumping the BJP and forming a new coalition government with Tejashwi Yadav’s RJD and the Congress.
“Nitish Kumar was with the paksh (ruling party) a month ago and now he is with the vipaksh (opposition). How dependable that is, is up to the people to decide. But I don’t think that the new dispensation in Bihar will have any big impact on the nation. I see it as a state specific development. I don’t think it will have any impact on national politics, but anyone is free to try,” said Prashant Kishor or “PK”.

The pictures were a jibe at the Bihar Chief Minister who recently broke his ties with the BJP and switched his side to the Mahagathbandhan government. Also, it is important to note that the ace poll strategist’s tweet came at a time when Kumar is in New Delhi and is meeting leaders of opposition parties amid speculations that he might become the prime ministerial face of the Opposition for the upcoming 2024 Lok Sabha elections.

“In Bihar, whatever he wants to do, he is welcome. But his statements had no relevance and you talk about statements but does he know ABC of what we have done and how much work has been done since 2005? But they are so good in publicity and statements and he is expert in these and keeps talking rubbish. When someone is talking like this, then try to understand he must have something in his mind. Like he wants to be with BJP or help BJP in a hidden way,” the Chief Minister sneered.
PK, an ace poll strategist with an impressive list of clients including the BJP, Congress and the Trinamool Congress, was made the Bihar Chief Minister’s number two in the Janata Dal United but was sacked within two years for “indiscipline” after his sharp, public criticism of his then boss.
(Bureau Report With Media Inputs).