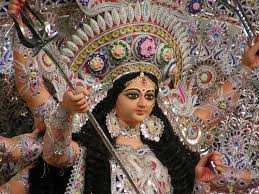 KOLKATA: With Mamata Banerjee getting everyday `exposed of direct links with Bengal scam star and Saradha head Sudipta Sen as a major beneficiary,’ this year Durga Puja’s cultural gangsterism, like Mao’s Cultural Revolution in China, wouldn’t bode well for the cultured elan for Bengal nor it would for two Assembly bye-polls.
According to political observers here, “the political volatility and combination of emerging realities it threw up may help BJP to score a point in hurly burly, but likely to take Bengal’s economic map 50 years back and will leave Mamata’s new Singapore investor friends scared
.’’ Though Durga Puja gagsterism isn’t let loose as yet in full as now its major patrons, TMC went on back foot politically, but profiteers and looters, have rolled out their campaigns and spending spree, (to get back more) and “extortion’’ in terms of chanda (local gangsters ask money from common households).
“This Durga Puja wouldn’t leave us, unless you’re a Government pensioner or you belong to upwardly moving economic class in peace,’’ said a famous culture Czar. Thus “politically cornered Mamata’s defence allegedly mired in Sen scam, doesn’t bode well for Bengal economically or politically,’’ said a political commentator, hastening to add: “We aren’t worried if BJP wins or TMC but both do not have a real roadmap for economic rebuilding of this wretched state.’’