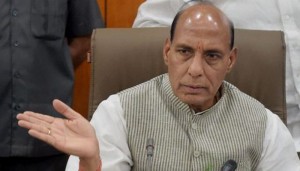 NEW DELHI : The Prime Minister’s Office today came out in strong support of Home Minister Rajnath Singh, describing reports of his son’s alleged misconduct as “plain lies” and “a malicious attempt at character assassination and tarnishing the government’s image.”Minutes before Prime Minister Narendra Modi’s office issued its statement, Mr Singh told reporters “If any charges against any family member are proven, I will quit politics and sit at home.”According to media reports, the prime minister scolded Rajnath’s son for taking bribes for police posting and warned him to mend his ways.
Sources say the two statements prove a deep rift within the BJP; Mr Singh allegedly holds another minister responsible for spreading rumours that his son, Pankaj, was recently castigated by the PM for inappropriate political conduct.The Home Minister said he had discussed the controversy with the PM and BJP President Amit Shah, who “express their surprise” at the reports.
Media reports today claimed that he had lobbied unsuccessfully for his party to select his son as its candidate from Noida for the Uttar Pradesh Assembly. The BJP has picked a 62-year-old woman entrepreneur, Vimla Batham, as its candidate.
Pankaj Singh is a General Secretary of the BJP’s Uttar Pradesh branch. Media reports said that the BJP, by refusing to give him a ticket, was signaling the sidelining of Mr Singh in a party being revamped by its new president. Mr Shah, like the PM, has said that party leaders must be averse to nepotism and avoid promoting their children or relatives for important posts. But BJP sources say that Mr Singh has been careful to ensure a low profile for his son and that the controversy that has engulfed him should not be linked to the by-election in Noida next month.
The controversy has been seized by opposition parties. Congress leader Ajay Maken said, “In public interest, we want to know what the charges are. And who are making those allegations that have pained Rajnath Singh so much that he talked about quitting politics.”CPI-M leader Sitaram Yechury said it was “quite clear” that a divide was emerging in the BJP.