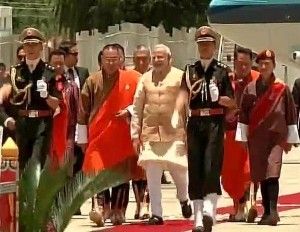 THIMPHU:Prime Minister Narendra Modi travelled in Thimphu in his specially designed armoured BMW 7 Series that was flown into Bhutan.The local media mentioned this, saying it was most secured edition of the vehicle in India, and said he used it also to go to Hejo on Sunday evening to formally unveil the Supreme Court complex that was constructed with Indian funding. PM Modi unveiled the inaugural plaque, which was described as “a gesture that will be forever be engraved in Bhutanese hearts” by Supreme Court’s Chief Justice Lyonpo Sonam Tobgy.
The chief justice said the establishment of the Supreme Court “exemplified the faith, trust and expectations” of the royal family, including former king, Jigme Singye Wangchuck, in the judicial system.“It expresses and defines the values of our democratic constitutional monarchy. With the blessings of their majesties, this mandala of justice embodies reverence for the rule of law, protection of rights, public justice in its highest form, and the dignity of a person,” he said.
The Supreme Court is adjacent to the Tashichhodzong, which has been the seat of the government since 1952 and presently houses the throne room and offices of the king. It is the seat of the executive, and parliament.
He said the proximity of the three arms of government “ensures the unity with which we serve the tsa-wa-sum (King, country and people).”  Constructed at a cost of more than Rs.705 million, the Supreme Court comprises five buildings, which looks like a dzong, the distinctive type of fortress architecture found in Bhutan.
The main building houses the chief justice’s office and a full bench known as singha asana or sengthri (lion throne or bench). The other four are named as gaja asana or langchhen (elephant throne), aswa asana or tachog (horse throne), mayura asana or maja (peacock throne) and garuda asana or khading (garuda throne).
The other three blocks will serve as administrative blocks and other purposes. The chief justice described the Supreme Court building as “not just another edifice”. ”It it is not just another court, it is a symbol of Indo-Bhutan friendship and symbolises the generosity and enduring support of the government of India,” he emphasised.
The concept and design of the building is inspired from Bhutanese history, mythology, spiritual traditions as well as the modern values of justice.
While its foundation stone had been laid on October 13, 2005, the construction work didn’t take off due to a dispute over the location and compensation for the land demanded by landowners in Hejo. The dispute over the land compensation was settled in 2007, when the Bhutanese government raised the amount. The construction was finally begun in December 2008.The Indian government is also assisting in the construction of eight dungkhag courts, or sub district courts.