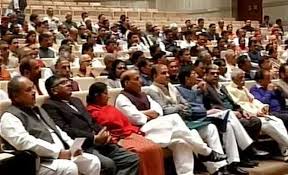 NEW DELHI: The debate on intolerance will continue to take place in the Lok Sabha on Tuesday. Congress vice-president Rahul Gandhi is expected to speak on the issue.
Left parties hold protest outside Parliament over ‘intolerance’. Led by CPI-M general secretary Sitaram Yechury and senior CPI leader D Raja and others, the parliamentarians held placards with slogans that read `Down down communalism` and “Rising intolerance in the country`.
Prime Minister Narendra Modi, who returned home this morning after attending the Climate Summit in Paris, is likely to make a statement in Rajya Sabha on `rising intolerance` today.
BJP MPs told not to make provocative statements as it deflects from PM Narendra Modi’s developmental agenda: Union Minister Mukhtar Abbas Naqvi
Union Minister of State for Parliamentary Affairs Mukhtar Abbas Naqvi says recently-concluded state polls and political debates on intolerance issue were discussed during the meet.
Senior party leaders — LK Advani, Murli Manohar Joshi — are also attending the BJP Parliamentary Party meeting.BJP Parliamentary Party meeting begins in Parliament.
We’ve a tolerant approach even towards politically fabricated propaganda of intolerance, which is why we are willing to discuss it: Minister of State for Parliamentary Affairs Mukhtar Abbas Naqvi

Communist Party of India-Marxist member Mohammad Salim, whose remark attributed to Home Minister Rajnath Singh created a furore during the debate on intolerance in the Lok Sabha on Monday, refused to tender an apology on Tuesday.
Noting that his statement was not kept in records, Salim said he will not apologise to the Home Minister. Salim had alleged that Singh was quoted by a magazine as having made the ‘Hindu leader’ remark after Narendra Modi became Prime Minister last year. Singh had vehemently denied it and said he was never hurt so much in his Parliamentary career as he was today.