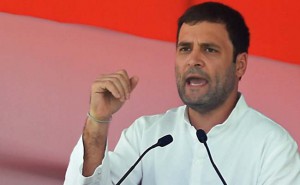 NEW DELHI: Rahul Gandhi addressed a large farmers’ rally on Sunday, attempting to focus rural anger towards Prime Minister Narendra Modi’s policies, in the first public appearance in months for the Congress vice-president, recently back from a 57-day sabbatical abroad.
At Delhi’s large Ramlila Ground, a hoarse-voiced Mr Gandhi told about 80,000 farmers – brought in special trains and buses – that his party would block PM Modi’s plan to bring a law to make it easier to acquire land for industrial and infrastructure projects.

“Modiji won the election with loans from big industrialists for marketing. He will pay back that loan now by giving your land to those industrialists,” alleged Mr Gandhi in an aggressive 22-minute speech.
He was flanked on stage by his mother, Congress president Sonia Gandhi and former prime minister Manmohan Singh – all three alleged that PM Modi was bringing anti-farmer policies.
“Enough is enough,” said Sonia Gandhi and Rahul too slammed the PM for his comments during his recent foreign visit in which he had talked about “cleaning up the mess” after the previous Congress government.
In a swift reaction, the BJP’s Ravi Shankar Prasad asked Mr Gandhi to apologise for “insulting the nation’s mandate” in last year’s election in which the BJP won a majority and Rahul Gandhi’s Congress was reduced to 44 seats, its worst ever showing.
Mr Gandhi, 44, landed in Delhi on Thursday after a mysterious 57-day foreign break that led to rebellious grumbling from party colleagues that he was a part-timer with dulled political instincts. Today’s rally was Mr Gandhi’s attempt to regain momentum.

PM Modi’s government must push through Parliament in the Budget session that reconvenes tomorrow, amendments to a land acquisition law passed in 2013 by the Congress government; the Congress, which has a majority in the Rajya Sabha or Upper House, is determined to stall it, setting the stage for a bruising showdown.

PM Modi addressed a workshop of his party’s MPs today, asking them to promote central schemes. “Hold your head high, be confident and tell the people what we are doing for them and they will laud you… All decisions I am taking are for the welfare of the poor,” the PM said.