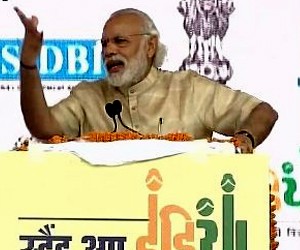 NOIDA: Prime Minister Narendra Modi today launched Stand up India scheme at a function in NOIDA. The scheme aims at promoting entrepreneurship among the Scheduled Castes, Scheduled Tribes and Women by facilitating loans in the range of 10 lakhs to one crore rupees.
Speaking on the occasion, Mr Modi said, stand up India will help in creating 2.5 lakh entrepreneurs as every bank branch will provide two such loans without collateral for setting up a new enterprise. He said, the scheme will transform the lives of people from dalit and tribal communities.

Mr Modi said, if Dalits and poor people are given opportunities, they can transform their lives. He said, through Stand Up India initiative, the government intends to turn job seekers into job creators.
Mr Modi also recalled the contribution of former Deputy Prime Minister Babu Jagjivan Ram on his 108th birth anniversary saying that he made India very proud. The Prime Minister also unveiled a web portal for the Stand up India initiative to enable online registration and support services.

The scheme creates a corpus of 5 thousand crore rupees for credit guarantee through National Credit Guarantee Trustee Company Limited. Handholding support for borrowers with comprehensive support for pre loan training needs, facilitating loan etc are also part of the scheme. RuPay Debit Card for drawal of working capital will be given to the aspiring entrepreneurs.
The whole process would be led by SIDBI with involvement of Dalit Indian Chamber of Commerce and Industry and various sector specific institutions. On the occasion Prime Minister also distributed 5100 E-Rickshaws under the Mudra Yojna. In addition the recipients are also covered under social security schemes.
The customers will be able to book E Rickshaws through Ola mobile apps and make online payment via Freecharge under the Digital India initiative. Charging and service station will also be set up, which will help the growth of emergence of small and micro enterprises along with creating many opportunities for entrepreneurs.
Speaking on the occasion, Finance Minister Arun Jaitley highlighted NDA government’s achievements in areas like financial inclusion, extension of insurance coverage, pension benefits to common people and loans to first-time entrepreneurs. Mr Jaitley said, 18 crore bank accounts have been opened under the Pradhan Mantri Jan Dhan Yojana, thereby bringing these unbanked people under the banking system.
He said insurance cover has been extended to 12.35 crore people during last one year while more persons are joining schemes in large numbers. Mr Jaitley said, direct benefits are being transferred to the bank accounts of poor people through Aadhar.
He said, loans worth 1.35 lakh crore rupees have been extended to entrepreneurs from Scheduled Caste, women and members of minority communities through the Mudra scheme during the last financial year against the target of 1.22 lakh crore rupees.