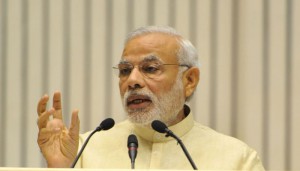 NEW DELHI: Prime Minister Narendra Modi on Monday launched the first national air quality index at the start of a two-day Environment Ministry national conference which is seen as a final step of consultations and taking states on board before bringing amendments in existing green laws.
The index, to be available in 10 cities for now, will inform the public about the level of pollution in the air on a daily basis in real time.
Speaking at the inauguration of the event, PM Modi expressed hope that the conference will prove to be a platform to hold detailed discussions which might be formulated in policies in future.

Emphasizing upon the importance of nature, he said, ”We have been brought up in a nation where environment protection is connected with human sentiments, and nature is considered next to God.”
Conserving nature is an important aspect of the Indian tradition, stressed the Prime Minister and added that we have no right to exploit it.
He said Indians must be sensitive towards the nature and environment so that the world has a lesser chance of raising questions about India’s contribution in tackling global warming.
The world is tackling the challenge of global warming, but we still haven’t been able to find a way, PM Modi said. He added that India has practiced the concepts of recycling and re-using for a long time. “We have not borrowed it from outside.”
If we bring change in lifestyle as minor as not using street lights on a full moon night, it will save substantial amount of energy, the PM noted.India is ready to take the lead in environment protection, on nuclear energy, he expressed confidently.
Stressing on effective waste management, Modi also said, “To create wealth out of waste is a big venture these days, we need to focus on waste management.”
“Waste management can be used to make better fertilisers which will give a better crop yield for our farmers. Better crop yield will mean better health for the people and a reduction in the cost of budget for the health sector,” said the prime minister.
Modi also talked about the importance of cleaning Ganga, saying that it would create better global perception of India. “The people in the towns and cities located on the banks of river Ganga are closely linked with the Clean Ganga campaign…If we stop the pollution of Ganga, we can create a trust with the world that India can protect the environment,” he said.
The Prime Minister also spoke about the rising tiger population in the country. “I came to know that the population of tigers went up by 40 percent in India. This is a matter of great pride for us, especially since two-thirds of the global population of tigers is in India and this global population is on the decline,” he said.

Environment Minister Prakash Javadekar, meanwhile, informed that the index will be expanded to 46 cities with a population of 1 million or more each and 20 state capitals in the next couple of years.
The air quality index (AQI) is a global standard used to understand air quality. It takes various parameters available in our national air quality standard and presents it as a cumulative on a 6 colour-coded scale. Dark green denotes the cleanest and maroon denotes the most polluted.