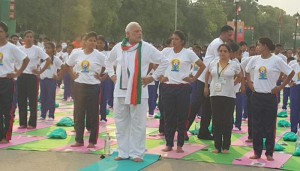 NEW DELHI: Among thousands of people twisting, bending and stretching on a ceremonial road in Delhi on Sunday morning was Prime Minister Narendra Modi. Before surprising everyone by joining a mass session to mark the first International Yoga Day, he commented: “Who would have thought that Rajpath would become Yoga Path?”
Dressed in all-white and a tricolour scarf, PM Modi performed a variety of poses, including the Vajrasan and Padmasan, along with nearly 37,000 people on red mats. (5 Best Pics of Yoga Day)
“Yoga is an everyday part of life,” said PM Modi, adding, “Yoga is not just for contorting your body into shapes. If that were true, people working in the circus would be called yogis.”
The 64-year-old prime minister briefly stopped to inspect students performing yoga around him before going back to following instructions spoken out in Hindi and English to the sounds of chanting and Tanpura.
The prime minister had tweeted early this morning: “Greetings to people around the world on 1st International Day of Yoga! Lets pledge to make Yoga an integral part of our daily lives #YogaDay.”
The government hopes that the grand event, also featuring bureaucrats, ministers and soldiers who had trained for days, will make it to the Guinness Book of World Records for the “largest yoga class at a single venue.”
Giant digital screens beamed the event live from Rajpath, where security arrangements rivaled Republic Day celebrations.
Similar yoga events took place simultaneously across India in parks, churches, homes, on military ships, an army base in the desert and even mid-air on some flights.
Delhi Chief Minister Arvind Kejriwal, a critic of PM Modi, was also spotted at Rajpath performing yoga. “Yoga is a good thing. Everyone should do it,” he told reporters.
The UN announced an International Day of Yoga last year after PM Modi’s appeal at the General Assembly.Yoga Day is also being celebrated in the rest of the world; in Britain, mats will be rolled out along the banks of the River Thames. Foreign Minister Sushma Swaraj will be at the UN’s headquarters in New York for the Yoga Day celebrations in Times Square.