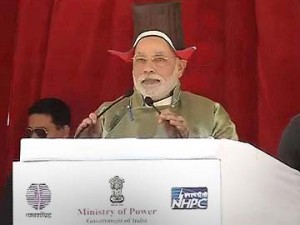 LEH (KASHMIR)  : Prime Minister Narendra Modi made his second trip in two months to Kashmir today. He will become the first Indian PM in 15 years to visit the Siachen glacier – dubbed the world’s highest battlefield.Addressing soldiers in Leh, Mr Modi said Pakistan “has lost the strength to fight a conventional war, but continues to engage in the proxy war of terrorism.”
Mr Modi’s remarks come amid heightened tensions in Kashmir, with India and its rival Pakistan trading accusations of ceasefire violations on Monday.
The state of Jammu and Kashmir is meant to vote for its next government in October, and the PM’s party is hoping to win the election, riding on the momentum he generated with his high-profile campaign and stunning victory in the national election in May.The region of Ladakh, where Mr Modi landed this morning, has four assembly seats and the party hopes that it will win at least half of the four assembly seats in this region in state elections to be held later this year.
“There was a time when Prime Ministers never visited this state. I have come here two times already, your love has drawn me here,” the Prime Minister said in Leh, dressed in traditional Ladakhi gear. Inaugurating a power plant, he said his three-pronged plan for the development of the region was about three Ps – “Prakash (electricity), Paryavaran (environment) and Paryatan (tourism).”
From Ladakh, Mr Modi will travel to the district of Kargil, becoming the first Indian leader t visit the sensitive area since the war with Pakistan in 1999.New Delhi and Islamabad agreed to a ceasefire in 2003 after the Pakistan army’s incursion in the Kargil sector in 1999.Despite the truce, firing along the disputed de facto border called the Line of Control, has escalated in the last few months.